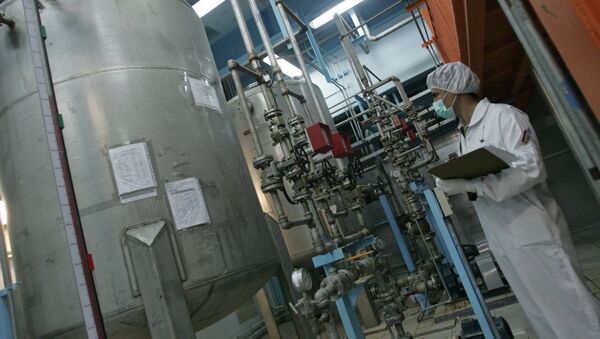 "According to its previously announced plans, Iran has exceeded the 300 kilogram limit of enriched uranium stockpile," Zarif said.

At the same time, the foreign ministry's spokesman said that Tehran's steps to decrease its commitments under the deal are "reversible" and urged Europe to accelerate its efforts to save the deal.

"The way INSTEX is being implemented and according to the messages [about this], it is not what Iran and our nation wanted. So the consultations continue," Mousavi said, as quoted by IRIB broadcaster.

Earlier in the day, Fars news agency said that Iran had exceeded the 300 kilograms (660 pounds) limit for the enriched uranium stockpile, set out by the nuclear deal.

"The stockpile of the uranium enriched at 3.67 percent exceeded 300 kilograms," the source told the agency, adding that the information has been confirmed by the inspectors of the International Atomic Energy Agency.

The news comes several days after Iran's envoy to a meeting of the remaining signatories to the 2015 nuclear accord said that European countries had offered too little at last-ditch talks to persuade Tehran to back off from its plans to breach limits imposed by the deal.

The envoy's words echoed a statement made earlier the same day by the Iranian Foreign Ministry that said, Tehran would make another decisive step in reducing its obligations under the JCPOA if the EU Instrument in Support of Trade Exchanges (INSTEX) didn't meet Tehran's requirements.

INSTEX was formally launched by France, Germany and the United Kingdom to facilitate trade with Iran in the face of US sanctions, but Iran has since criticised the tool as a weak measure with limited capacity. EU countries have said that the mechanism will initially deal with food and medicine, while Tehran has sought oil trade to be included.

On May 8, Iranian Foreign Minister Mohammad Javad Zarif said that Tehran would not be carrying out "some [of its] voluntary commitments" to the JCPOA, as the EU and other states had failed to resist pressure from the US, who pulled out of the accord last year and re-imposed sanctions on Iran. Since then, Iran has increased uranium enrichment fourfold.

Tehran's move to increase the rate of enriching uranium came as a response to the US withdrawal from the 2015 nuclear deal. Following the withdrawal in 2018, the US has reinstated all sanctions against Tehran and has imposed even more restrictive measures against the Middle Eastern country. The US move was also slammed by other signatories of the deal, including the European Union, which insisted that Tehran fully complied with the treaty and have urged the US not to reimpose sanctions.