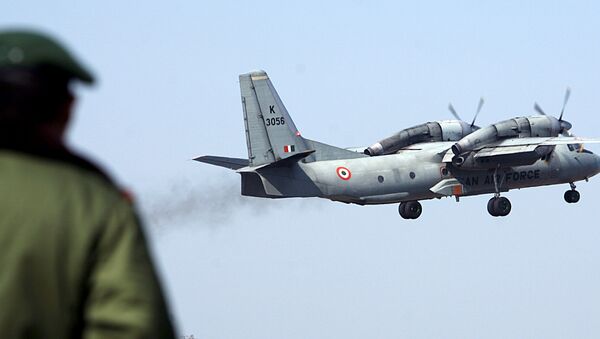 © REUTERS / Amit Gupta/File Photo
Subscribe
The Indian Air Force has said it will replace the AN-32 transport aircraft in the future. However, "all transport aircraft in IAF cleared for flying are fully airworthy," Defence ministry said. In addition to the crash on 3 June this year, only one AN-32 has been lost within the past four years, in July 2016 while flying over the Bay of Bengal.

New Delhi (Sputnik): In the wake of a recent accident involving an AN-32 military transport aircraft, the Indian defence ministry has said the contract with Ukraine to upgrade AN-32 aircraft has not been terminated but the modernisation has been stalled as the Indian facility is waiting for kits from Ukraine. The ministry said that 15 AN-32 aircraft have already been refurbished at the facility at 1 BRD (Base Report Depot) in the Indian city of Kanpur.

"Out of 105 AN-32 aircraft planned for upgradation, 55 aircraft have been upgraded – 40 aircraft in Kiev, Ukraine and 15 aircraft at 1 BRD, Kanpur. Upgradation of the remaining aircraft is planned in a phased manner depending upon the supply of mod kits by Ukraine,"  Indian Defence Minister Rajnath Singh said on Monday during a reply in parliament.

India and Ukraine had signed a $398 million deal in 2009 to upgrade its 101 An-32 aircraft within five years after an Indo-Russian joint project failed to take-off in 2007 which was meant to develop a 20-ton medium transport aircraft to replace the An-32 aircraft. The Indo-Russian project was abandoned as differences emerged between the two countries due to the lack of availability of defined-specification engines at the preliminary stage. The planned modernisation work included the installation of new radars, upgraded avionics and strengthened airframes.

The ministry has, nevertheless, rejected the report published in the Indian media which claimed that the aircraft which crashed on 3 June near the Chinese border had been fitted with an obsolete Emergency Locator Transmitter (ELT) which decreased its chances of survival.

"No aircraft is fitted with obsolete and outdated Emergency Transmission Locator (equipment)," the minister added.

The Indian opposition party Congress had questioned the motive behind not deploying upgraded AN-32 planes in the mountainaous terrain of the Himalayas. "The government must tell - Why was upgrade of AN-32 not completed despite the India-Ukraine agreement of 2009?" Congress chief spokesperson Randeep Singh Surjewala had asked.

On 7 June, a Ukrainian delegation, which included top representatives from SpetsTechnoExport (STE), the Ukrainian arms export firm, visited New Delhi and discussed the upgrade work, which had been stalled since 2016 due to the conflict in the east of the country and related diplomatic problems with its Russian partners. Kiev had reportedly developed alternatives to replace the Russian-made systems in the platforms. The upgrade work will take at least four more years, the official added.

The An-32 is the workhorse of the IAF transport fleet and plays a critical role in the Himalayan region, as they can operate with minimal ground infrastructure to transport troops, food, and equipment to far-flung areas.