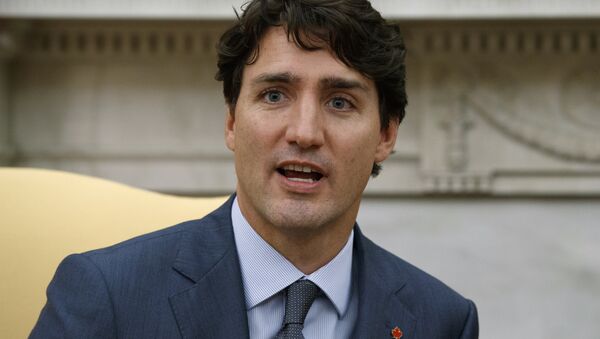 © AP Photo / Evan Vucci
Subscribe
Grand gatherings of world leaders are a feast for all sorts of commentators watching the interactions between the power players in a bid to get an insight into their relations. An encounter between the Canadian prime minister and the president of Brazil in Japan could hardly have sent a brighter signal, as many suggested.

Canadian Prime Minister Justin Trudeau reportedly found himself in an awkward situation at the meeting table during the G20 summit in Osaka, Japan, where he was given a spot between Chinese President Xi Jinping and his Brazilian counterpart Jair Bolsonaro. With tensions running high between Ottawa and Beijing over trade issues and Huawei row, the Canadian politician turned to Xi for a moment, before coming back to Bolsonaro and offering him a handshake, as many commenters suggested.

But the Brazilian president gave Trudeau what seemed to be the cold shoulder, turning his back on him, as he decided to heartily welcome another guest instead. Trudeau and Bolsonaro, however, eventually clasped hands after the latter finished greeting his other neighbour.

Nevertheless, Trudeau’s apparent look of confusion and loss between Xi and Bolsonaro has turned into a fresh Twitter meme.

​Others questioned the seating in Osaka.

Whose idea was it to put Trudeau between Xi and Bolsonaro?!! https://t.co/0r3j5BSc66

​Some suggested other proof that Trudeau is not mingling well at summit.

Trudeau doesn't do too well at G20 events. pic.twitter.com/6lTMg5C8X9

​However, some had an entirely different take on the situation, suggesting Trudeau was polite and simply wanted to get Bolsonaro’s attention for a person near him.

C’mon Stephan! Trudeau clearly taps Bolsonaro on the elbow and gestures to the person on Bolsonaro’s left, alterting him that some is trying to get his attention. https://t.co/gODhsQa6qj

Why? He was being polite telling the other guy about the person to the left trying to say hello.

Don't do cheap bs like that, and I can't stand Trudeau.

Trudeau haters claiming Bolsonaro snubbed Trudeau are lying. This shows Trudeau politely motioning to the Brazilian President to let him know the gentleman on the other side of Bolsonaro was trying to get his attention to shake his hand. Bolsonaro then shook Trudeau’s hand. https://t.co/c6MPdcNMOx

000000
Popular comments
He was being polite telling the other guy about the person to the left trying to say hello.
Tazo
30 June 2019, 21:07 GMT2
000000
There was a time, when Canada had only friends, because it was a peaceful, trading country. Everybody respected us, we took care of ourselves, we had our own, independent foreign policy that served our interests, we did not volunteer as a puppet of the US, in its criminal wars and provocative games. We also did not follow the leftist ideology that later resulted in ongoing destruction of our culture, demoralization of our youth, deliberate destruction of our education system, as well as significant underfunding of our health care and social programs. The state was serious about enforcing anti-trust laws and consumer protection regulations. Today, the system is praying on the people. System that does well at the expense of the people is a colonial model of economy. Trudeau is not a leader, he is a figurehead and a follower of the unelected financial elites. On the video, I agree with Igorito and Tazo. Nice try, Sputnik! Buy yourself a new glasses.