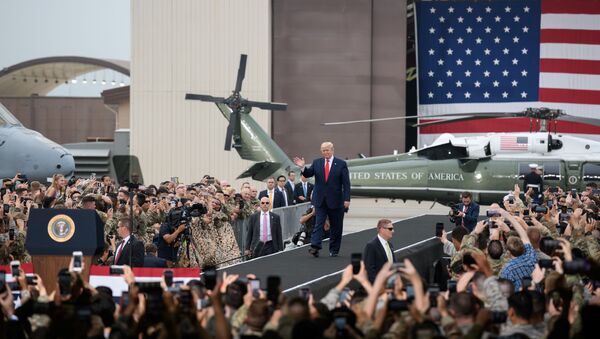 TOKYO (Sputnik) - US President Donald Trump said Sunday his country was upgrading its nuclear arsenal and making new weapons that it hopefully would never use.

"We are totally revamping and improving and in some cases getting brand new nuclear weapons — never wanna have to use them — but we have the most and the best in the world", he told soldiers at the Osan Air Base near Seoul, South Korea.

Trump said his administration had made "historic" investments in the military after it was "sadly depleted", including spending billions of dollars on upgrades to missile defences.

"You must be armed with overwhelming force … We’ll have it so strong — it’s getting to a level where it wasn't even close. Hopefully, we’ll never have to use it", he said.

Trump promised the military would soon see "hundreds and hundreds" of planes coming in. Twelve new warships will enter service next year, including an aircraft carrier and three guided-missile destroyers.

Trump's visit to the airbase came hours after he met with North Korea's Chairman Kim Jong-un in the Demilitarized Zone (DMZ), reviving hopes for an improvement in ties between the two countries.

The improvised meeting at the DMZ occurred half a year after the latest talks between Washington and Pyongyang faltered in February 2019 when North Korea demanded the full release from sanctions by the US. At that time, Trump said that he would be glad to see all the sanctions lifted, but noted it was simply impossible.