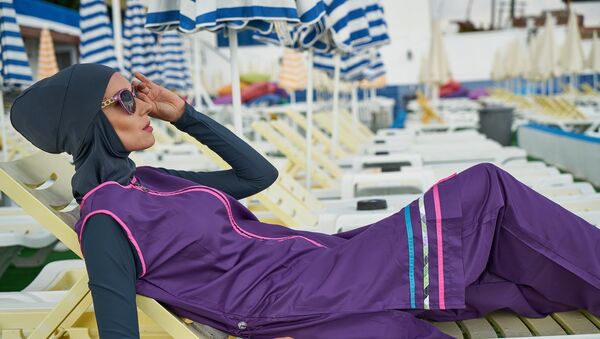 He described the action in the French city of Grenoble aimed at claiming the right of Muslim women to swim in burkinis as "civil disobedience".

"I tell you very clearly that there is a provocation because burkini is a feature of religious fundamentalism", Quatennens said.

TWEET: "Dear @AQuatennens, thank you for this wholesome reaction. It would be good now to call to order Les Jeunes Insoumis who support the initiative of the burkinis in the pools of #Grenoble".

​The tweet made a reference to members of a youth group, Les Jeunes Insoumis.es of Grenoble, who have signed a joint communique with several associations, unions and political parties including Les Jeunes Communistes de l'Isère and the National Union of Students of France (UNEF), the main national students' union in France.

In the document, they express support for the Alliance Citoyenne by promoting "access to public service for each and every one". They also denounced equating the choice "to wear the veil by Muslim women to political Islamism".

Last week, a dozen Muslim women, accompanied by activists from Alliance Citoyenne, went on Operation Burkini, by appearing at the municipal swimming pool in Grenoble, defying a ban on wearing such full-body garments.

Public pools in the southeastern city require that women either wear a bikini or a one-piece suit, while men wear bathing shorts, or speedo-style swimsuits, for reasons of security and hygiene.

As they went rogue, a debate over the Muslim swimwear has re-entered the national conversation, with Eric Ciotti, member of the right-wing party Les Republicains (The Republicans), tweeting: "The burkini has no place in France, where men and women are equal. To let these Islamist activists in Grenoble or anywhere else in France is to renounce the Republic. I will never accept it".

Marlene Schiappa, France's gender equality minister, in turn, told the newspaper La Dauphine Libere that women should be able to access municipal pools regardless of their religion, but "when it comes to dozens of women wearing a burkini, there is a political message there. The message is to cover up and its goal is to create a new norm".

Meanwhile, as the stand-off with burkini-wearing bathers persists, French nudists have threatened to bare it all to challenge the "burkini brigade" on Facebook. Around 230 people have expressed their intention to arrive naked at public swimming pools.