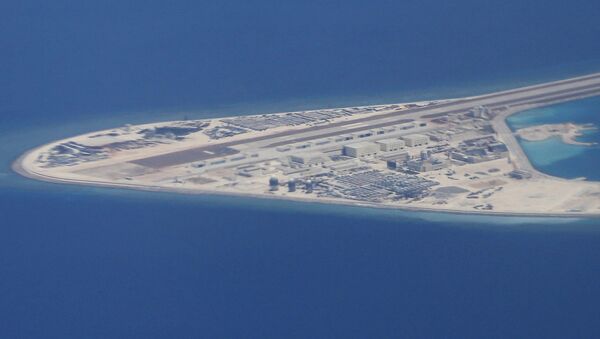 © AP Photo / Francis Malasig/Pool Photo
Subscribe
International
India
Africa
France and the UK earlier pledged to send their warships to the waters claimed by China, who is said to have ramped up its military presence in the region. Beijing insists that the South China Sea is free and open for navigation, but warns that violating China’s sovereignty will not be tolerated.

Minister of State of the French Minister for Europe and Foreign Affairs Jean-Baptiste Lemoyne has reaffirmed the French Navy's commitment to “patrolling, cruising in the South China Sea", the Philippine News Agency reports.

“We will continue [to do so]. Our defence minister made it very clear during the last Shangri La Dialogue a few weeks ago", Lemoyne said, as cited by the media.

He said the European country, which has troops in the Indo-Pacific region, was interested in securing the rule of international law in the South China Sea, disputed by several nations, including Beijing.

"It's a proof of our commitment to be sure that freedom of navigation is a fact... is real in the sea", Lemoyne explained during the ambush interview by the Philippine state media.

The outlet points out that these comments followed a rant by Philippine President Rodrigo Duterte who challenged the US, Great Britain, and France not to stay out of the dispute among several South Asian nations and China over what his administration refers to as the West Philippine Sea.

China has an overlapping claim with the Philippines, Vietnam, Brunei, Malaysia, Indonesia, and Taiwan over the resource-rich South China Sea, which is a major strategic passageway, with over $5 trillion worth of maritime cargo passing through the area annually and overwhelming reserves of untapped oil and natural gas.

Beijing exerts control over the vast majority of islands, reefs and shoals in the sea, and has been, along with other competing countries in Southeast Asia, expressing concerns over the deployment of US vessels in the area, and blasting Washington for violating its sovereignty. Although Beijing stated earlier that the South China Sea is free and open for navigation, it insisted that violations of China’s sovereignty will not be tolerated.

Several Western nations have pledged to expand their activities in the region although they are not claimants in the territorial disputes. The United States and its allies such as the UK, France, Canada, Australia, and Japan have been defying China’s territorial and maritime claims by conducting so-called Freedom of Navigation Operations, sailing military vessels in China’s reclaimed territorial waters past the Taiwan Strait, which separates mainland China and Taiwan. Beijing claims the latter as part of its territory but doesn’t control it. On a multitude of occasions, Beijing has criticiced these moves as a “pretext to conduct illegal and provocative moves”.