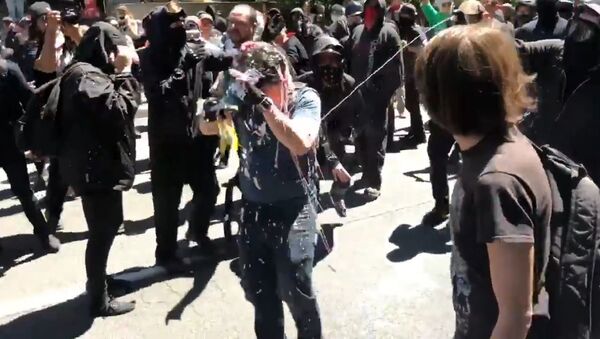 Demonstrators from at least three groups took to the streets of Portland on 29 June including people from the so-called Proud Boys and anti-fascist groups that involve "Antifa", with fights breaking out in places as marchers clashed.

Conservative writer Andy Ngo has been surrounded and struck by demonstrators wearing black to cover their faces, The Independent reported. The Portland-based journalist, who describes himself as an editor at the conservative website Quillette states he is "hated by Antifa", and was covered in a milkshake, eggs and spray, according to the paper.

"I just got beat up by the crowd. I was in the middle of the street and they stole my GoPro and punched me several times in my face and my head. I’m bleeding", Andy Ngo said on Twitter.

The writer stated on Twitter that he has been taken to hospital.

The video of the incident has emerged online.

First skirmish I’ve seen. Didn’t see how this started, but @MrAndyNgo got roughed up. pic.twitter.com/hDkfQchRhG

​Portland police reportedly arrested three suspects after eight people were injured and three taken to hospital amid the violent clashes between the protesters. The demonstrators have reportedly clashed with the police too.

Police have received information that some of the milkshakes thrown today during the demonstration contained quick-drying cement. We are encouraging anyone hit with a substance today to report it to police.

​Tensions between demonstrators from the Proud Boys, an organisation that is famous for street fights, the "HimToo Movement", a campaign against false rape accusations organised by conservative activist Haley Adams, and counter-protestors from Rose City Antifa intensified on 29 June, with representatives from the parties turning violent.

The trend of "milkshaking" right-wing figures began in the UK last month when British activist Tommy Robinson was targeted by a milkshake attack, and has since spread to the US.