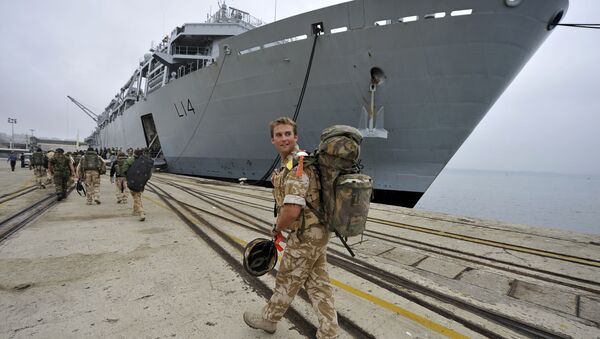 The last time Royal Navy vessels engaged in operations of a comparable scale in the Baltic Sea was during 'Operation Red Trek' in 1918-1919, when the UK attempted to eliminate the nascent Soviet republic as part of a wider Allied military intervention against Moscow during the Russian Civil War.

Speaking to reporters aboard the HMS Albion in Klaipeda, Lithuania, less than 50 km from the Russian exclave of Kaliningrad on Friday, Mordaunt boasted that this year's Operation Baltic Protector drills involve close to 4,000 troops and 44 ships from nine countries, and send a "clear" message to Moscow that the NATO alliance is "aligned and ready" to deal with a "more assertive" Russia.

"Russia is becoming more assertive, we see her deploying more forces and new weapons, and we can imagine scenarios that may play out in the future," the defence secretary said. "So it is important and right that we stand together with our allies."

Russia has repeatedly expressed concerns about the activities of NATO, whose total defence spending is expected to exceed $1 trillion this year compared to Russia's 2018 defence budget of $63.8 billion, and particularly the alliance's regular efforts to beef up its military presence along Russia's borders in Eastern Europe.

Last year, Czech Army General and NATO Military Committee chairman Petr Pavel challenged the rhetoric used by many of his colleagues when he told reporters that he found the use of the term "Russian aggression" to describe Russian military activities in the Baltic Sea region "ungrounded," and said the alliance hasn't been able to detect any offensive acts on Russia's parts near the borders of the Baltic states.

Flags, blue skies and ships! Today the #JEFtogether celebrated its one year anniversary onboard the @hms_albion in #Klaipeda where the nine partner nations meet. CONGRATULATIONS. JEF continues on exercise #BalticProtector @forsvaretdk @Forsvarsmin pic.twitter.com/lfPTmJnZi4

According to Mordaunt, Britain's involvement in the Baltic Sea gives the Joint Expeditionary Force "an adaptable force, the ability to deploy more than 10,000 people on a whole variety of missions, independently or as part of NATO operations."

"We have shifted our budgets to be more focused on the region," she clarified.

During a 3 day visit that underlined the UK’s unwavering commitment to European security @PennyMordaunt visited @hms_albion in Lithuania. Through the Joint Expeditionary Force we are sending a clear message: our nations stand together to tackle shared challenges🇬🇧#BalticProtector pic.twitter.com/0zqpsyarkR

Along with its participation in the Joint Expeditionary Force, the UK also heads up the NATO battalion in Estonia, deploying 900 troops there. 120 more British troops and an Apache helicopter gunship took part in the Iron Wolf drills in Lithuania earlier this month. NATO expects to hold a total of 102 exercises in 2019, with allied nations planning 208 separate national and multinational exercises in the same period.

Since the end of the Cold War, NATO has expanded eastward to incorporate every former member of the Warsaw Pact, as well as the Baltic states and several republics from the former Yugoslavia. The alliance began the expansion despite verbal commitments to Moscow in 1990 that it would not do so in exchange for Soviet support for the unification of Germany. Along with the deployment of thousands of troops and the regular drills along Russia's borders, Russian officials have expressed concerns about the deployment of components of the US missile shield in Poland and Romania, which it says can be converted for offensive purposes.