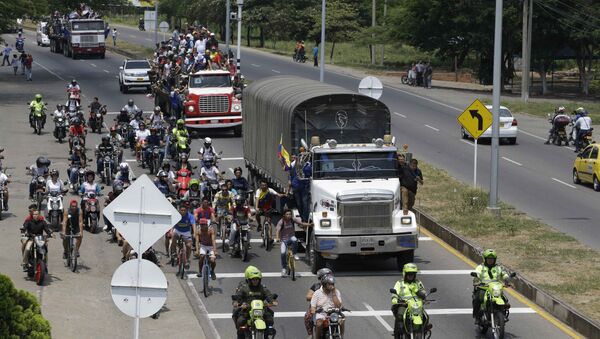 OSAKA (Sputnik) - US President Donald Trump admitted Saturday "it takes time" to change the government in Venezuela but assured reporters that Washington had several options on the table.

"We have a lot of strategies. I have five different strategies I could change any moment. But in the meantime we are helping them from the standpoint of getting them as much aid as we can," he said at a briefing capping his trip to G20 in Osaka, Japan. "We have a lot of things in store if we have to do that," Trump added, in reference to a possible regime change, but stressed "we do not want to get involved to the extent that you may be thinking but we have a lot of alternatives … We’ll see what happens."

Venezuela has been embroiled in a political crisis since January when US-backed opposition leader and head of the National Assembly Juan Guaido proclaimed himself interim president in a bid to replace incumbent president, Nicolas Maduro. The political crisis was aggravated by the economic one that worsened as the United States imposed several rounds of sanctions against Venezuela.

Maduro has accused Washington of working with Guaido in order to orchestrate a coup and to take control of Venezuela’s resources.