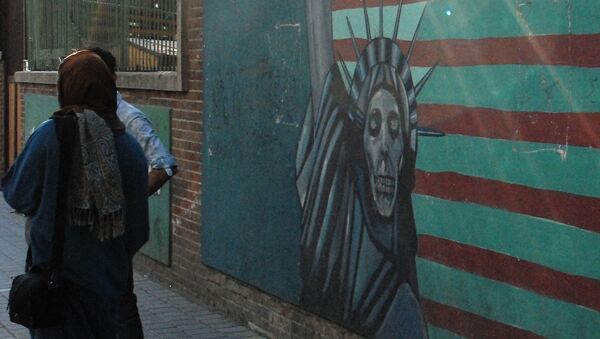 As relations between Washington and Tehran have been nosediving for over a year now, after Trump, an avid critic of the Iran nuclear deal, abruptly pulled out of the accord and re-imposed economics sanctions, on Monday the US imposed a new batch of sanctions against Iran, targeting, in particular, the country's supreme leader, Ayatollah Khamenei.

Seyed Mohammad Kazem Sajjadpour, Deputy Head of Iran's Foreign Ministry and the President of the Institute for Political and Int'l Studies (IPIS) took part in the Russian-Iranian dialogue hosted by the Valdai Discussion Club on Wednesday and spoke to Sputnik on the sidelines, he spoke about where escalating tensions between Iran and the US could lead, and which countries Washington's anti-Iran sanctions are really aimed at.

Sputnik: In the current situation, what is the likelihood that tensions between the US and Iran will lead to war?

Sajjadpour: Of course, there is tension, but the situation is not so critical that it will turn into a war. The US is aware of Iran’s “red lines”, and Rouhani [Iran's President - Hassan Rouhani] has made clear what they are.

Sputnik: After Trump's announcement of new sanctions against Iran's supreme leader and foreign minister, the Iranian Foreign Ministry spokesman said that this “is the permanent closure of the path of diplomacy”. Do you agree, or is there still a way forward?

Sajjadpour: This is about the undiplomatic and even anti-diplomatic steps taken by the United States. There are contradictions in what the US says and does. On the one hand, the Americans declare that they want negotiations, on the other, all their actions run contrary to diplomatic efforts.

Sputnik: With whom can Iran cooperate in the current situation to resist US pressure?

Sajjadpour: It is important to note that US sanctions are directed not only against Iran but also against countries such as Russia and China, countries that, from the US point of view, stand out in regional and international politics.

Sputnik: What impact will additional sanctions have on Iran's economy?

Sajjadpour: More sanctions will be an economic challenge for Iran. In fact, they are directed against ordinary people. However, history has demonstrated that people will cope with the most difficult challenges.

Sputnik: How can Iran oppose this? What role can joint financial mechanisms play in fighting US pressure?

Sajjadpour: In general, over the past two decades, the United States has done everything to dominate the international financial system. They have turned the dollar into their weapon and used it as a military tool. There is an understanding across the globe that this order must be resisted.

The process of creating different mechanisms has been launched, for example- Russia and Iran have agreed to conduct trade in national currencies. These mechanisms can help. The system that the United States has established will face resistance by the world community.