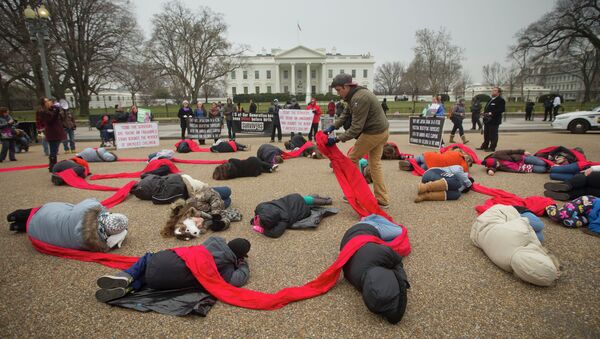 © AP Photo / Pablo Martinez Monsivais
Subscribe
International
India
Africa
Alabama Governor Kay Ivey signed into law a bill on 15 May that bans abortion in nearly all cases, with no exceptions for rape or incest. Donald Trump, however, reacted later saying that he was 'pro-life' but he would make three exceptions - rape, incest and protecting the life of the mother.

The US Supreme Court on Friday declined to hear Alabama's bid to bring back to life Republican-backed state legislation that would have effectively prohibited the procedure after 15 weeks of pregnancy.

A lower court ruling abolished the legislation adopted in 2016 that sought to criminalise the dilation and evacuation method - this procedure is most frequently used when an abortion is performed during the second trimester of pregnancy.

The issue of abortion rights has turned into a matter of massive societal concern in the US after two states passed extremely restrictive anti-abortion bills. An Alabama legislation passed in mid-May rendered it a felony that can incur 10 to 99 years in prison for any doctor attempting to perform an abortion.

Following this move, another US state, Missouri, approved a ban on abortions after eight weeks of pregnancy, allowing exceptions in the case of medical emergencies, but not of rape or incest.

With discussions heating up, US President Donald Trump turned to Twitter to speak up about abortion; he referred to himself as "strongly Pro-Life" but went on to note that he would have made exceptions in three instances — rape, incest and cases where the pregnant woman's life was in danger.