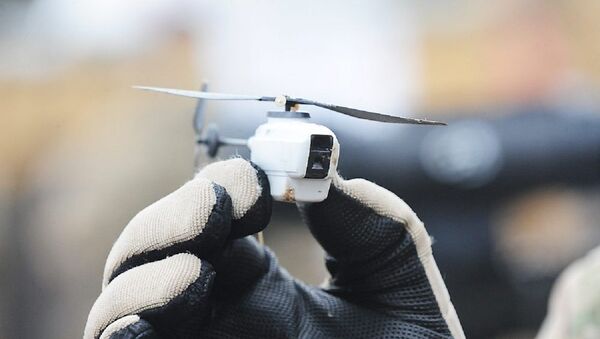 © Flickr / UK Ministry of Defence
Subscribe
International
India
Africa
US Army soldiers bound for Afghanistan next month will be taking along a new toy for testing: a pint-sized reconnaissance drone that can fit in your hand.

The 1st Battalion, 508th Parachute Infantry Regiment will be testing out the Black Hornet Personal Reconnaissance System in a combat environment for the first time when they head to Afghanistan next month, a brigade spokesperson told Stars and Stripes for a Friday article.

Sputnik first reported on the robots in May 2015, noting the Pentagon had gotten the idea from the British Army.

​Despite weighing just 18 grams - about the weight of an adult mouse - the mini-drone packs impressive capabilities. It has both regular and thermal cameras, can fly for 25 minutes and reach speeds of up to 10 meters per second and can roam as far as a mile from its home base. It flies just like a tiny helicopter, and can navigate either by using GPS or in a GPS-denied environment, as many battlefields can quickly become. The system can be deployed in as little as two minutes, and training to use it only takes three days.

“The potential of having a personal [unmanned aircraft system] equipped to every squad gives them the ability to assess a situation from a cover and concealed position, mitigating the risk to the soldier,” the Army said in a May 2019 Army statement announcing the coming deployment.

"I was really impressed with the system, its capabilities, and what it offers soldiers in terms of risk reduction,” Sgt. Ryan Subers said, as quoted in the May statement. “This kind of technology will be a life-saver for us because it takes us out of harm's way while enhancing our ability to execute whatever combat mission we're on. I'm very grateful for technology like this and to be a part of the first unit to use it."

Science & Tech
Lockheed Martin Unveils New Tiny 'Outrider' Drone (VIDEO)
“With this system, you can [positively identify] enemies, you can look for [improvised explosive devices] on your route,” Kristian Molander, a supervisor and operator with the manufacturer, FLIR Systems, told Stars and Stripes. “If you’re taking fire from areas you can’t see, you can use this system to identify stuff before you move into the line of fire.”

The Army originally picked up a handful of Black Hornets in 2016 for use by Special Forces, but now it’s signed a $40 million contract with FLIR Systems to provide the Army with 9,000 Black Hornet systems. Each system has two drones, Stars and Stripes noted.