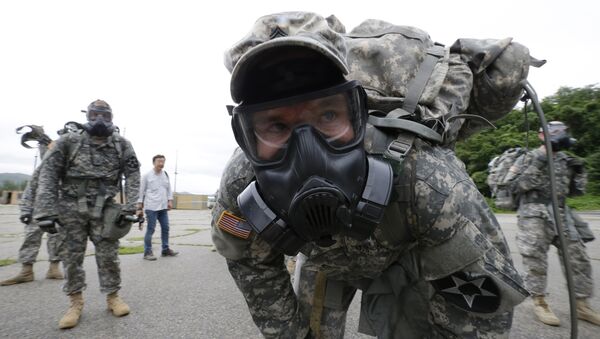 © AP Photo / Ahn Young-joon
Subscribe
Ilya Tsukanov
All materialsWrite to the author
With Moscow destroying the last of its Soviet-era chemical weapons arsenal in 2017 under supervision from the world's chemical weapons watchdog, the US is thought to have the largest stockpile of such weapons in the world. Washington originally promised to eliminate the agents by 2012, but has pushed back the deadline repeatedly to at least 2023.

Iranian Foreign Minister Mohammad Javad Zarif has called on Washington to destroy its chemical arsenal, saying the only way toward a world without weapons of mass destruction would be to "completely destroy the chemical weapons arsenal of the US as the only owner of such weapons in the world."

In a written address cited by Mehr News dedicated to the commemoration of the 1987 chemical attack on Sardasht, which occurred during the Iran-Iraq War and killed over 1,000 people and left 8,000 more seriously injured, Zarif reiterated that "Iran, once more, emphasises its principal policy of condemning the use of chemical weapons anywhere, anytime and under any circumstances."

The US, the foreign minister alleged, was "addicted to using inhumane tools of economic sanctions and terrorism" against Iran, with the restrictions imposed by Washington said to have made providing the Sardasht attack's victims with medication significantly more difficult.

Zarif also blasted many countries' "intentional negligence and ignorance" in the face of US actions, saying such behaviour was "deeply regrettable" and similar to "their silence thirty-one years ago toward the savage attack of the Ba'ath dictator [Saddam Hussein], backed by the US, against the defenceless civilians in Sardasht."

Iran suffered up to 100,000 civilian and military casualties at the hands of chemical weapons during the Iran-Iraq War of 1980-1988, and was one of the first countries to sign and ratify the Chemical Weapons Convention (CWC) in the 1990s. Iran did not retaliate in kind to the estimated 350+ large-scale gas attacks by Iraqi forces despite having the legal right to do so under existing treaties. The country reported the complete elimination of its chemical weapons stocks at the moment it ratified the CWC in 1997. 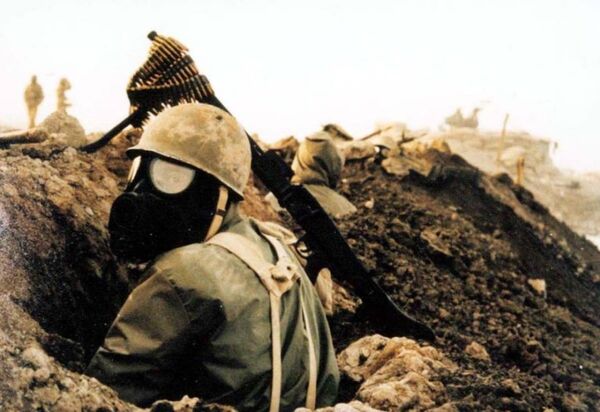 Last year, Washington accused Tehran of maintaining a secret chemical weapons programme in a breach of its commitments under the CWC. Iran flatly denied the claims, and recalled the existence of the US's own arsenal, as well suspicions that Israel, which signed by never ratified the CWC, may also have access to such weapons.

With an estimated 2,500 tonnes of various chemical agents in its possession, the United States is thought to have the largest declared chemical weapons stockpile in the world. In 2017, Russia, the other country to amass a major stockpile during the Cold War, destroyed the last of its once vast arsenal under the supervision  of the Organisation for the Prohibition of Chemical Weapons. As of 2019, the only other country in the world believed to have chemical weapons North Korea, which has not signed on to or ratified the CWC.