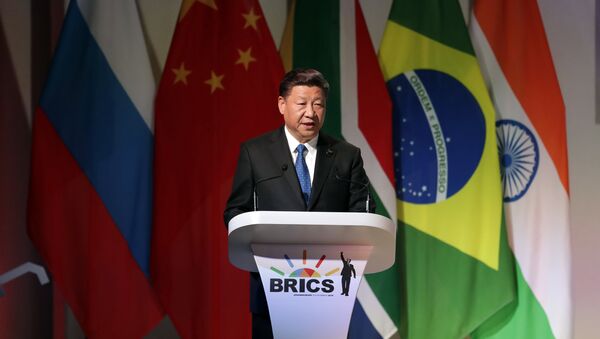 OSAKA (Sputnik) - Chinese President Xi Jinping said that the international community was facing instability, while the biggest risk was posed by the developed countries' unilateralism and protectionism, leading to trade wars.

"We are now facing a very difficult situation at the international arena. Even though the global economy is generally growing, we are witnessing the increase in instability and uncertainty. The biggest risk is that some developing countries take protectionist and unilateral measures leading to trade wars and economic blockade. All of this destroys the international trade order and chain of production and this also affects the mutual interests of our countries. Besides, this casts a shadow on peace and stability in the entire world, as well as development," Xi said at an informal BRICS meeting held on the margins of the G20 summit in Osaka.

Xi noted that reforming the World Trade Organization (WTO) would meet the interests of developing countries, adding that BRICS states should reject protectionism and defend the key principles of the organization.

"The WTO reform is based on our mutual interests, mutual interests of developing countries. BRICS member states have close views on this matter, and we should reject protectionist measures and defend key values and principles of the WTO, including a special differentiated approach to developing countries. We should overcome the impasse faced by this organization," Xi said.

Meanwhile, Russian President Vladimir Putin said that the use of national currencies for transactions between BRICS member state was promising.

"The joint work on introducing the practice of using national currencies of our states for international transactions looks promising," Putin said at the BRICS meeting.

"Our traditional meetings ahead of summits of the Group of Twenty undoubtedly play an important role in forming joint positions on key items of the agenda of these forums. They show that the strategic partnership of the BRICS counties works," he said.

Bolsonaro Says Determined to Increasing the Influence of BRICS

"Our administration is determined to actively work on increasing the influence of this group," Bolsonaro said at an informal BRICS meeting on the margins of the G20 summit in Osaka.

The Brazilian leader also praised the role of the BRICS bank in cooperation between the member states.