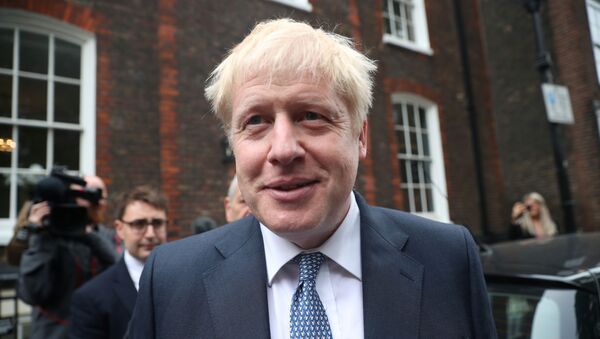 Boris Johnson says British dipolomacy should focus on the younger generation of Russians and added that: "Putin is not Russia."

Speaking at a Conservative Party hustings in Exeter in the south west of England, he said his priority was to get out of the European Union by 31 October and he added: "I do believe freedom of movement does not work."

​When asked about Huawei, Mr Johnson said he did not think Britain should do anything to compromise intelligence sharing with allies like the United States.

He said: "We should not be doing anything that will deter cooperation with our most valuable intelligence partners, the Five Eyes."

The Five Eyes is an intelligence sharing network of anglophone countries - the UK, US, Australia, Canada and New Zealand.

We must leave the EU on October 31st, with or without a deal, so we can begin to unite our country, restore trust in our politics, and move beyond Brexit to focus on those issues that make voters’ lives better.

​Last month Prime Minister Theresa May sacked Defence Secretary Gavin Williamson after accusing him of leaking information about the debate in the UK National Security Council about whether to allow Huawei work on Britain's 5G network.

Mr Williamson, who is supporting Mr Johnson's bid for the leadership, strenuously denied he was behind the leak and is tipped for a return to Cabinet.

But Johnson said at the event on Friday, 28 June, nobody had been offered any job in a government he might lead in the future.

He also said one of the areas Donald Trump was right on was that the West needed to work to "constrain Iran".

​His comments about Russia come as the Russian President Vladimir Putin told the Financial Times liberalism was "obsolete."

Mr Putin said: "This liberal idea presupposes that nothing needs to be done. That migrants can kill, plunder and rape with impunity because their rights as migrants have to be protected."

He praised the rise of populism in Europe and the United States and said ideas like multiculturalism were "no longer tenable."