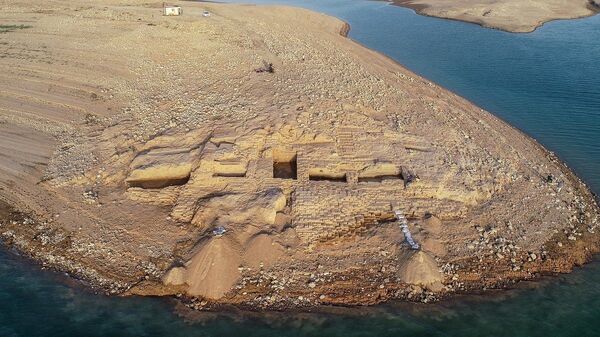 The search of the ruins yielded a number of clay cuineforms tablets which researchers will now attempt to translate in attempt to uncover the secrets of the millenia-old empire the artefacts belonged to.

A team of archaeologists recently uncovered 3,400-year-old ruins of a palace in Iraq, that once belonged to the Miitani Empire, with one of the scientists working on the site describing the find as “one of the most important archaeological discoveries in the region in recent decades”, Deutsche Welle reports citing an announcement made by the University of Tübingen.

The discovery was apparently made possible by a drought which struck the region and caused the water levels in the Mosul Dam reservoir to recede, revealing the ruins which previously were hidden below.

The researchers discovered some 10 cuneiforms clay tablets while searching the ruins.

The team, however, had limited time to explore the palace as the water started to rise, once again concealing the palace.

"We also found remains of wall paints in bright shades of red and blue. In the second millennium BCE, murals were probably a typical feature of palaces in the Ancient Near East, but we rarely find them preserved. Discovering wall paintings in Kemune is an archaeological sensation", Ivana Puljiz of the University of Tübingen said.

She also noted that the Mittani Empire “is one of the least researched empires of the Ancient Near East”, and that not even its capital has been identified so far.

As the media outlet notes, scientists will now attempt to translate the tablets they've found to see what secrets they might reveal.