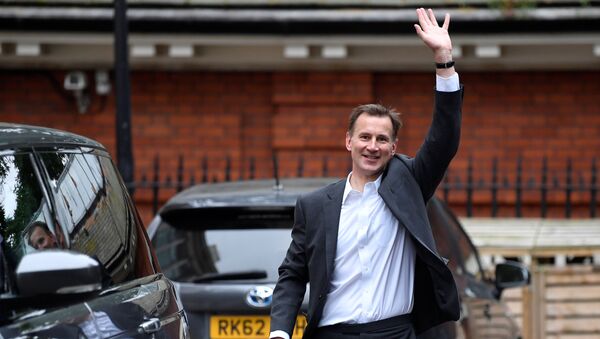 Secretary of State for Foreign and Commonwealth Affairs Jeremy Hunt is one of two remaining candidates for the Conservative party's leadership. Hunt, who voted to remain in the EU, weighed in on Brexit Wednesday, telling BBC radio he would vote to "leave" if the UK held another referendum.

Secretary of State for Foreign and Commonwealth Affairs Jeremy Hunt has ignited the ire of Brexiteers after he accused Leave voters as being from "little England" in a Twitter Q&A as the Tory leadership hopeful gears up to go head to head with rival Boris Johnson in the final stages of the battle, reports the Express.

In a Tuesday night Q&A, Hunt was asked how he intends to unite a divided nation if he became Prime Minister:

“Deliver a Brexit that works for the 48 per cent not just the 52 per cent – a positive open and internationalist Brexit. Great Britain, not Little England.#BoJoNoShow.”

By appearing to suggest Brexiteers represented “little England” - a term often used by Remainers - Hunt ignited the ire of Brexiteers, with one tweeting: “I definitely won't be voting for you next month Jeremy.”

Lost my vote! Never a good plan to insult the electorate!

​​Hunt’s intention to deliver Brexit was immediately pounced upon by Tory and Labour MPs.

Little England? As a Conservative member I'm pretty sure you've just killed off any chance now. @BorisJohnson all the way Little Hunt.

I definitely won't be voting for you next month Jeremy.
Anyone who uses the phrase Little England in a pejoritive context has blown it with me.

The tweet that guaranteed you lose. LOL. Little England, wtf was you thinking...

There were some twitter users who were in agreement with Hunt.

I’m with Jeremy on this. Millions of leave voters did want that too. Positive, open, internationalist - not little England. Too right. Why’s that wrong?

Jeremy Hunt then doubled back and tweeted that his meaning had been misinterpreted, and he had meant quite the opposite:

That is literally the opposite of what I said. Brexit is not and never will turn us into Little England and I’d never suggest that’s what Brexiteers want. But it must be right to address the fears of some remain voters on this, which I will do in order to heal Brexit divisions. https://t.co/Bz8ufb2N2U

​Twitterati were only picking up steam as they continued voicing their opinions on whether Hunt would be able to deliver Brexit.

Little England is never said in a positive way Jeremy. It's derogatory. Can't be unsaid now.

To be fair Boris is still getting my vote whatever you meant .👍

​Tory leadership candidate Jeremy Hunt, who voted to remain in the EU, told BBC radio on Wednesday he would vote to "leave" if another referendum were to be held in the UK, as the two remaining rivals Hunt and Johnson clashed over their plans regarding delivering Brexit.

Boris Johnson has hardened his stance on guaranteeing the UK’s exit.

In an open letter Johnson challenged Hunt to commit to taking Britain out of the EU on 31 October “come what may”, warning not doing so would have “devastating” consequences for the Conservative Party and the nation.

As Jeremy Hunt hit back, he dubbed it a “fake deadline” which - if adhered to - could lead to a general election handing over power to Labour and thus completely derailing Brexit.

On 27 June the two remaining contenders to succeed Theresa May face more questions in a digital hustings.

UK Foreign Secretary Jeremy Hunt and his predecessor Boris Johnson secured their places as the final contenders for Tory leadership after UK Prime Minister Theresa May formally stepped down as a head of the Conservative Party on 7 June.
May is set to resign as caretaker PM on 22 July to be replaced by one of two candidates chosen by the party's members after a postal ballot.
Polls currently show former foreign secretary Boris Johnson as a frontrunner, touted as the most likely successor to Theresa May.