The Contenders for the 2020 Democratic Party Nomination 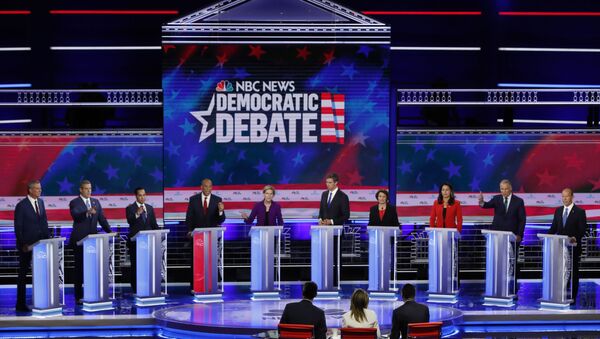 The first primary election — in New Hampshire — is six months away but already  Democrats have said they are up for the challenge.

So who will be seeking the Democratic nomination and what are their chances?

It shows the dearth of talent in the field when the elderly former Vice President, Joe Biden, is the 7-2 favourite to win the Democratic nomination.

If he were elected to the White House next year Biden would be 78 by the time of his inauguration - that is a year older than Ronald Reagan was when he left office.

​Unlike Trump, who has made a career out of being the “outsider”, Biden has spent virtually his entire life in Washington.

He was elected as a Senator in Delaware in 1972, when he was just 29, and retained the seat for 36 years, only giving it up when he was inaugurated as Vice President under Barack Obama.

​Last week Trump referred to Biden as “a dummy," and called him "One Percent Joe," a reference to Biden’s less than stellar performances in the 1988 and 2008 Democratic primaries.

Trump added: “I think he is the weakest mentally. I like running against people that are weak mentally.”

Then there is Biden’s tendency to touch women inappropriately.

​Friends and colleagues say Biden is just a tactile guy but several women have referred to unwelcome touching during his years in power and they have spurred a string of memes about “Creepy Uncle Joe”.

Despite his own infamous “grab them by the p***y” remark, Trump has been unable to resist the temptation to mock Biden for his behaviour.

The Massachusetts senator is adored by the liberal intelligentsia in Washington and in New York but does Elizabeth Warren have the appeal to win back the millions of "Trump Democrats" in traditional blue states who defected in 2016?

Originally from Oklahoma and a registered Republican until the mid-1990s, Warren spent most of her life teaching law and specialising in bankruptcy protection in Texas and Pennsylvania as well as at Harvard.

She became a senator in 2013 and has worked assiduously in Congress but she comes over as dour and patronising, compared to the sassy and simplistic president.

Warren comes across as a patrician Ivy League figure and Trump enjoys winding her up, especially when it comes to her Native American ancestry.

Trump dubbed her “Pocahontas” after she mentioned that she believed she had some Native American blood and he went to so far as to offer to donate US$1 million to charity if she took a DNA test and it showed she was “an Indian.”

​At one rally, depicted in Warren's video, Trump offered to donate $1 million to charity if Warren were to take a DNA test "and it shows you're an Indian."

In October 2018 she produced a report by Carlos Bustamante, a professor of genetics at Stanford University, which suggested she did have Native American DNA.

​But the DNA test was immediately criticised by Chuck Hoskin Jr, the Secretary of State of the Cherokee Nation, who said: “A DNA test is useless to determine tribal citizenship. Current DNA tests do not even distinguish whether a person’s ancestors were indigenous to North or South America.”

Harris, 54, was the second favourite behind Trump when she threw her hat in the ring back in January but she has since slipped down the betting.

So who is she?

She is the offspring of two immigrants. Her father, Donald Harris, was born in Jamaica and came to the US in 1961 while her mother Shyamala Gopalan was the daughter of an Indian diplomat.

​Her mother gave her daughters names taken from Hindu mythology and said in 2004: “A culture that worships goddesses produces strong women.”

Kamala is a Sanskrit word meaning lotus, as well as a name for Lakshmi, the Hindu goddess of wealth and good fortune. Harris’s middle name, Devi, is a  general term for a goddess.

Her parents divorced when she was a child and her mother took her and her sister Maya — now a successful attorney in her own right — to Montreal, where she taught at McGill University.

In 1994 she met and dated Willie Brown, a prominent San Francisco Democrat politician, for a while. She was 29. He was 60.

​Harris was elected as a senator in 2017 and has impressed in Congress but she has also faced criticism for saying she was not aware of allegations of sexual harassment against one of her aides, who resigned in 2016.

Harris is an intelligent, attractive woman who could does not have the baggage of a Hillary Clinton and could certainly hold her own against Trump in a televised presidential debate.

But is that enough to beat Trump?

In 1908 nobody would have imagined that in 2008 a black man would be elected as President of the United States.

But can anyone imagine an openly gay President? In 2020?

​Step up Pete Buttigieg, the Mayor of South Bend, Indiana, who is the first openly gay presidential candidate to run for the Democratic nomination.

Less than half of all US states have fully liberalised laws on gay marriage and other LGBT rights and being gay in the South and the Midwest is a far bigger problem for Buttigieg than his surname (which is of Maltese origin and has proved difficult for TV presenters to pronounce).

At the weekend Buttigieg said he would not rule out adopting children in the White House. He told CNN: “It wouldn’t be the first time that children have arrived to a first couple, but obviously that’s a conversation I had better have with Chasten before I go into it too much on television.”

There is only candidate who can give Pete Buttigieg a run for his money when it comes to surnames - John Hickenlooper.

The former Governor of Colorado styles himself on his Twitter profile as a craft ale brewer and “occasional banjo player”.

​Hickenlooper’s great-grandfather was General Andrew Hickenlooper, who was a Union Army hero in the Battle of Shiloh.

Sadly Hickenlooper’s odds are long with the bookmakers and he needs to put in some hard graft between now and the first primary in January if he is to win the nomination.

Vote Castro and you get two for the price of one.

Julian Castro’s identical twin brother, Joaquin, is a Democratic Congressman who has represented their home town - San Antonio, Texas - since 2013.

​So if his brother ever became President, maybe Joaquin could stand in for him if he ever fell ill.

Castro became the Mayor of San Antonio before Obama picked him to be Secretary of Housing and Urban Development in 2014.

​"I am not a frontrunner in this race, but I have not been a frontrunner at any time in my life," said Castro, who is unlikely to last long in the primaries.

Castro is clearly going for the Hispanic vote, and it is huge nowadays.

Another candidate who hopes to appeal to Hispanic voters is Beto O'Rourke, who is of mixed Irish and Mexican heritage.

Despite the fact that he LOST a congressional race against Ted Cruz in last year's mid-term elections, the charismatic O'Rourke continues to be mentioned as a front-runner for the Democratic nomination.

​Maybe the party machine thinks he has what it takes to be a gallant loser.

His supporters point to the fact O'Rourke raised more money than any candidate for a Senate seat in American history-three times as much as Cruz, used social media brilliantly, inspired young people and ultimately lost by only 215,000 votes in a giant state like Texas.

But he still lost.

A member of the House of Representatives from Hawaii, Gabbard is a veteran of the 2003 Iraq War — having served in the National Guard — and sits on the House Foreign Affairs Committee.

She is the first American Samoan member of Congress and also the first Hindu on Capitol Hill, something that may prove difficult to sell in the "Bible belt".

​In 2012 the Republicans struggled to sell Mitt Romney — a Mormon — to some of their more devout voters, but at least he was a Christian.

Gabbard is something of a maverick and has come out in favour of an anti-interventionist foreign policy.

In 2017 she met Syrian President Bashar al-Assad despite criticism from many fellow Democrats.

"When the opportunity arose to meet with him, I did so because I felt it's important that if we profess to truly care about the Syrian people, about their suffering, then we've got to be able to meet with anyone that we need to if there is a possibility that we could achieve peace, and that's exactly what we talked about," said Gabbard.

Another virtual unknown outside of the Beltway, Delaney is a former member of the House of Representatives from Maryland.

The 56-year-old former congressman was the first out of the traps when he announced his plan to run way back in 2017.

​Delaney said he was stepping down from Congress and bypassing a run for state governor in 2018 to concentrate on his bid for winning the Democratic nomination.

A self-made businessman, he will not want for money for his campaign but some of his positions put him out of touch with traditional Democrat voters — he wanted businesses to be able repatriate money earned overseas without paying taxes in exchange for buying infrastructure bonds.

"I am not afraid of him," Gillibrand said of Trump, when she announced on 16 January she was setting up an exploratory committee, the first step on the road to running for the Democratic nomination.

Gillibrand, who was elected for her second full term in the Senate in November, rose to national prominence in recent years as a forceful proponent of the #MeToo movement.

She has said she wants to make her campaign about gender issues, but it is difficult how she can win the nomination on that single issue, let alone win the White House.

Ojeda, a former US Army paratrooper who has retained a buzzcut hair style, voted for Trump in 2016, but has since flip-flopped and now wants to be the man who turfs him out of office.

Trump called him "a total whacko" when Ojeda ran unsuccessfully as a Democrat in a congressional race in West Virginia in 2018.

"I relate to the people far more than what the President can ever relate to these people. The very people he comes down to West Virginia and stands in front of could never afford one single round of golf in some of his fancy country clubs. That's not where I stand," said Ojeda, when he announced his candidature.

A businessman from New York, little is known about him, other than he wants to institute a universal basic income — a policy which was proposed by Bernie Sanders during the 2016 campaign.

"I'm the most qualified person in the country to be president. The issues that we face as a country today are the issues that have been in my wheelhouse, that I've worked on my whole life", he said modestly at a rally in Montana last month.

The Minnesota senator might appeal to Midwestern voters who do not find candidates from California, New York or Massachusetts to their tastes.

"It is really important that whoever we put up has an understanding of those voices that weren't heard in 2016 from the Midwest and really from the middle of the country, and from the middle of our citizenry," Klobuchar said recently, when she said she was "considering" a tilt in 2020.

​But the omens are not good for a Minnesota President.

The state produced Hubert Humphrey, who ran for President in 1968, and Walter Mondale, who was in line for the White House in 1984.