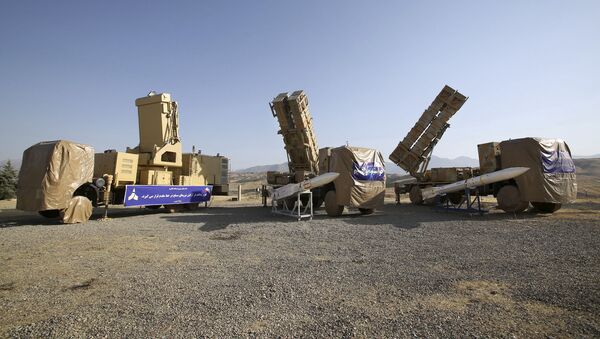 © AP Photo / Iranian Defense Ministry
Subscribe
Tensions between the two countries rose dramatically last week after an Iranian air defence missile shot down a US drone in what Iran said was its airspace. Washington claimed the drone was downed over international waters, with President Trump later saying that he nearly ordered a 'retaliatory' strike which would have killed 150 Iranians.

The US military will get an even "stronger" response if it dares to violate Iran's borders, Ali Larijani, speaker of Iran's parliament, has warned.

"The downing of the American drone was an experience for them not to violate our borders. But, if they do it, the Armed Forces will give them a stronger reaction," Larijani said, as quoted by PressTV.

Blasting US foreign policy and claiming that the US government was "the main cause behind [the] disruption of peace and security in the region and the whole world," the senior parliamentarian also accused the US government of extorting and humiliating its Arab allies.

"US bullying behaviour is to justify entering the region, so that the Islamic Republic of Iran stood against the US' wrongheaded policies and fought Daesh* by all means," Larijani said.

The parliament speaker's remarks are the latest in the back and forth barbs between Iran and the US in recent days following the downing of a stealthy $130 million US RQ-4 Global Hawk drone by an Iranian missile on 20 June.

On Wednesday, President Trump, who almost launched a series of airstrikes against Iranian targets over the drone's destruction, blasted Iranian authorities, accusing them of being "not smart" and alleging that the country was "going down the tubes" due to their policies and tough US pressure. Earlier, Iranian President Hassan Rouhani called the White House "mentally retarded" and said that Washington's new sanctions against Iran were a sign of the Trump administration's "despair."

The drone incident was just the latest escalation of tensions in the region, and followed a series of apparent sabotage attacks against oil tankers in the Persian Gulf and the Gulf of Oman, and the deployment of US carrier strike group in the Middle East amid claims of an 'imminent' Iranian threat to US interests in the region. Last month, on the one year anniversary of the unilateral US withdrawal from the 2015 Iran nuclear deal, Tehran announced that it would scrap some of its voluntary commitments under the deal. Iran has emphasized, however, that it remains uninterested in pursuing nuclear weapons.