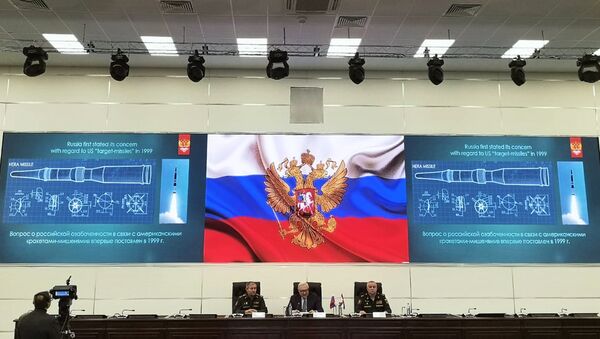 Earlier this year, after accusing Moscow of violating the terms of the Intermediate-Range Nuclear Forces treaty, the US formally suspended its obligations under the treaty and triggered a six-month withdrawal process. Moscow denied any violations, and accused Washington itself of breaching the treaty's terms.

The US moves to scrap the Anti-Ballistic Missile treaty in 2002 and to quit the Intermediate-Range Nuclear Forces treaty in February have placed the world at risk of a new nuclear arms race, Russian President Vladimir Putin has said in an interview with the Financial Times.

"I believe there is such a risk," Putin said, noting that Washington merely used Russia as a pretext to scrap the INF.

"Now the agenda is focused on the Strategic Arms Reduction Treaty (New START). I hope that I will be able to talk about it with Donald [Trump] if we happen to meet in Osaka," he added.

Earlier this year, following the US's withdrawal from the INF, a landmark 1987 treaty aimed primarily at reducing the risk of nuclear war in Europe, Moscow voiced concerns that Washington could allow New START to expire in 2021 without renewal, as well.

"We said that we are ready to hold talks and to extend this treaty between the US and Russia, but we have not seen any relevant initiative from our American partners. They keep silent, while the treaty expires in 2021. If we do not begin talks now, it would be over because there would be no time even for formalities," Putin stressed.

According to Putin, although President Trump expressed an interest in the arms limitation issue during their last conversation, the US side still isn't "making any practical steps" in this direction.

"So if this treaty ceases to exist, then there would be no instrument in the world to curtail the arms race. And this is bad," the Russian leader said.

Asked to comment on the situation in the world today, and whether he gets the sense that the world has become more fragmented than it was in the past, Putin said he did feel that this was the case.

"During the Cold War, the bad thing was the Cold War," the president noted. "But there were at least some rules that all participants in international communication more or less adhered to or tried to follow. Now, it seems that there are no rules at all. In this sense, the world has become more fragmented and less predictable, which is the most important and regrettable thing."

Recalling his proposals to the Bush administration in the early 2000s to try to preserve the ABM Treaty, which he said he still feels "was the cornerstone of the entire international security system," Putin stressed that he was "convinced that the world would be a different place today, had our US partners accepted" the proposal of joint missile defence projects between the US, Russia and Europe.

"Unfortunately, this did not happen. We can see that the situation is developing in another direction; new weapons and cutting-edge military technology are coming to the fore. Well, this is not our choice. But, today, we should at least do everything so as to not aggravate the situation," Putin said.

Asked about the current tensions between the US and China, including the risk of geopolitical conflict tuning into military conflict, Putin said such a possibility would have horrific consequences for humanity. "The entire history of mankind has always been full of military conflicts, but since the appearance of nuclear weapons, the risk of global conflicts has decreased due to the potential global tragic consequences for the entire population of the planet in case such a conflict ever happens between two nuclear states. I hope it will not come to this," Putin said.

President Putin is expected to meet President Trump in Osaka, Japan on Friday on the sidelines of the G20 summit, with the leaders expected to discuss a broad range of bilateral and international issues.