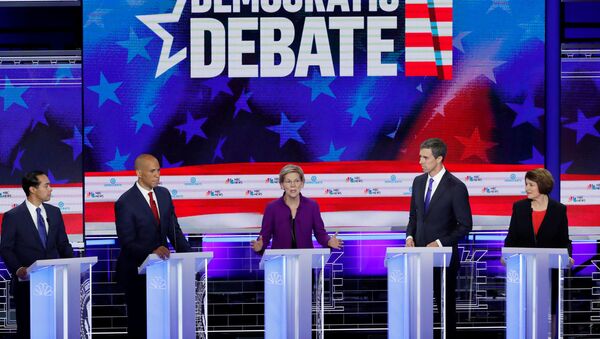 On the debate stage for the Democratic presidential primary race on Wednesday, the 10 candidates focused heavily on personal appeals and anecdotes, as well as a bizarre attempt to “pander” to Latinos, but to the throngs of protesters who flocked to the streets of Miami, what really matters is policy, a Sputnik correspondent reported.

With a bewildering array of 20 candidates in the race for the Democratic nomination for US president in 2020, the first debate between them had to be sorted randomly into two, 10-person nights in Miami, Florida. Sputnik News correspondent Bob Schlehuber reported to Radio Sputnik’s By Any Means Necessary Thursday after speaking with a variety of protesters outside the debate hall both before and after the previous night’s two-hour-long showdown, hosted by MSNBC.

Schlehuber told hosts Sean Blackmon and Eugene Puryear that “much of the action was before the event, outside on the streets of Miami,” where protesters from various stripes both for and against candidates and even the Democratic National Committee (DNC) as a whole made their opinions on the events inside the Adrienne Arsht Center for the Performing Arts heard before a sea of media.

“One group that knew they had a good shot at getting the attention of the media were those fighting to close the Homestead Children’s Detention Center” not 30 miles away in southern Miami-Dade County, Schlehuber said. “The group arrived with large artistic fences symbolizing the gates at the detention center.”

“We’re seeing attacks on reproductive access across the board,” one pro-choice activist told Sputnik, “a rash of abortion bans.”

The Contenders for the 2020 Democratic Party Nomination

Other issues that drew demonstrators to the streets of Miami included medical coverage, with  health care workers fighting for a universal expansion of the US’ state-run health care service for the elderly under the banner “Medicare for All.” One protester noted that “since we have this huge movement, every presidential candidate is talking about Medicare.”

The urgency of climate change wasn’t lost on either the protesters or the moderators of the debate inside, both of whom noted that the sea-level coastal city they were in was already suffering regular inundations on clear days. A Progressive Democrats of America member who lives in Miami-Dade County told Schlehuber that “we can’t afford” the kind of slow, incremental changes typically favored by Democratic candidates to address climate change.

In a strange twist, Schlehuber found over 100 New York Police Department officers had travelled to Miami to protest New York Mayor Bill de Blasio, one of the candidates in the debate, who they said has a “lack of understanding how a civil society works.”

Schlehuber told Sputnik that supporters of US President Donald Trump formed one of the largest contingents of protesters. One said that “unless you like socialism and want everything for free,” a Democratic candidate would likely not enter the White House in 2020, by their estimate.

“I think [Elizabeth] Warren had the best night,” Schlehuber said, noting that people on the streets of Miami felt she “solidified what they thought she was bringing to the table and the momentum she was carrying.”

“It sounded like Julian Castro also grabbed the attention of quite a few folks last night at the debate. Corey Booker, who I’m never quite sure of what he’s doing up there, also seemed to grab the imagination of a lot of people,” he added. “They also liked what he had to say.”

“I think the big losers last night might’ve been Beto O’Rourke and Tim Ryan, with his Taliban and al-Qaeda mishap or gaffe, you would maybe call it,” Schlehuber said.

First Round of Dem Debates Separates the Wheat from the Chaff (Kinda?)

“I don’t think anybody was impressed by either Corey Booker or Beto O’Rourke’s Spanish,” he said. “They’re poorly pandering.”

While Hawaii Rep. Tulsi Gabbard didn’t quite get as much time to speak as some of her supporters might have liked - and perhaps didn’t do so as forcefully as they would have preferred, either - Schlehuber noted that people afterward thought she was the winner of the debate because of how well they expected her talking about her experience as a US military veteran to resonate with voters in Iowa, where the first primary caucus will take place next February.

“Bernie Sanders’ fingerprints are all over the debate stage last night,” Schlehuber said, noting how much of the debate rhetoric has shifted leftward since the 2016 primaries in anticipation of a leftward shift among Democratic voters. However, he was skeptical that the message would resonate with fence-sitting voters in states like Iowa, South Carolina and Florida, who often vote conservatively.

'Real Professionals': Trump Riles Up Twitter as He Trolls MSNBC Over Debate Glitch

“I don’t think we’re going to get a deep political analysis of the current situation around the world or within US domestic policies within 45-second soundbytes, but [Amy] Klobuchar did one of those things were you overfocus on the quips that you want to throw in there, one of those all-foam-no-beer kind of things, and you forget to actually study the policies that people really want to hear about. And that’s why Warren’s going to continue to do well for folks. She’s got ‘plans, plans, plans,’ as people were saying on the street last night,” Schlehuber said.

“Those personal stories like Beto and Booker kept on trying to tell, I think they sound so made-up, and they don’t sound real,” he said. “People know these are big-time politicians traveling around the country trying to get elected president … I think it fell flat, and I think people much rather care about the policies writ large.”