Trump: My Plan B With China on Trade is to Reduce Business With China 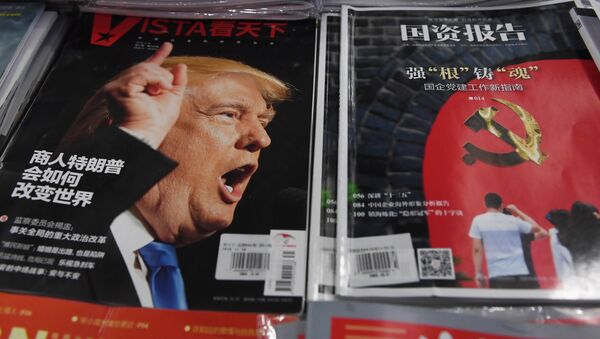 © AFP 2021 / GREG BAKER
Subscribe
The president earlier threatened to slap tariffs on the remaining $300 billion in Chinese goods coming into the United States unless Chinese President Xi Jinping agreed to meet with him at the G20 meeting in Osaka, Japan to hammer out a trade deal favourable to Washington.

President Donald Trump has reiterated his promise to slap additional tariffs on China if a trade deal is not reached, saying that he was "happy" with things as they are and that China needed the deal more than the US did since its economy has been hit hard by the existing restrictions.

The president said that the US could hold off on fresh tariffs if a deal is reached at the G20 meeting. The new tariffs could amount to a 10 percent tax on all Chinese imports into the United States, rather than the 25 percent figure mentioned earlier, Trump clarified.

Trump confirmed that the US has been talking to its Chinese counterparts on the trade issue over the past few days.

According to the president, it was "okay" with him if the US-China trade tensions impacted the world oil market.

In the interview, Trump also took a shot at Vietnam, another major US trade partner, saying US negotiators have been talking to Vietnamese officials over Hanoi's approach to trade with the US, which Trump said was even "even worse than China".

"A lot of companies are moving to Vietnam, but Vietnam takes advantage of us even worse than China", he said. "It's almost the single worst abuser of everybody".

The US and China were thrust into a tit-for-tat tariff spat in mid-2018, when the Trump administration slapped a 25 percent tariff on $50 billion worth of Chinese goods. Since then, the economic superpowers have hit one another with several more rounds of tariffs, with Trump recently threatening to put import duties on the remaining estimated $300 billion in Chinese goods coming to the US unless a deal can be worked out. At a campaign rally last week, Trump promised that the US would hammer out a fair trade deal with Beijing or walk away from talks.

Germany 'Delinquent' on Its NATO Obligations

Turning to the subject of NATO, the US president accused Germany of being "delinquent" on its NATO defence spending obligations while spending "billions and billions" on Russian energy.

Trump has repeatedly accused Germany and other NATO countries of failing to pay their fair share for the alliance and commit to the 2 percent of GDP defence spending figures outlined by the alliance. Germany's defence budget for 2019 is expected to amount to $49 billion, or about 1.2 percent of the country's GDP.

000000
Popular comments
“If the world was a bar, America would be the angry drunk waving around a loaded gun. Yeah, the other people in the bar might be afraid of him, but they sure as hell don’t respect him.” ~ American commentator.

keyboardcosmetics
26 June 2019, 16:26 GMT3
000000
LMAO Walmart would go broke real fast since most everything they sell is made in China! How many other companies resell Chinese goods in America?