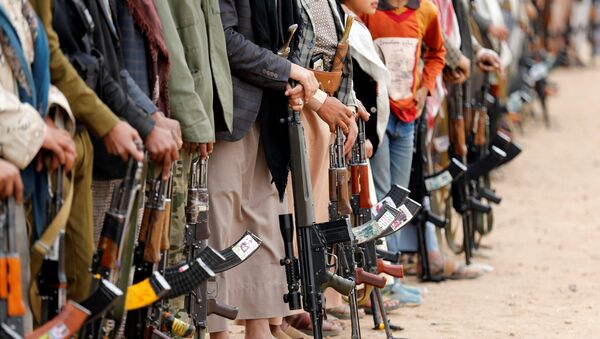 © REUTERS / Khaled Abdullah
Subscribe
International
India
Africa
If the US goes to war with Iran, the biggest losers will be the Saudi-led coalition fighting in Yemen, an Iranian scholar told Sputnik Wednesday. With the Houthis on the offensive already, an Iranian attack on Saudi infrastructure in the early hours of the war would open the door to Houthi invasion.

In recent months, the Houthi rebels in Yemen have stepped up their attacks on Saudi soil, launching ballistic missile attacks as well as drone strikes against nine different urban locations across southwestern Saudi Arabia. While the Saudis and their US allies have tried to point the finger at Iran, accusing it of waging a proxy war against Riyadh by way of its fellow Shiite Houthis, the truth is that for all their technical sophistication, the Saudi-led coalition’s war in Yemen has failed to destroy the resistance to its onslaught and instead steeled Yemeni resolve like never before.

Mohammad Marandi, an expert on American studies and postcolonial literature who teaches at the University of Tehran, told Radio Sputnik’s Loud and Clear Wednesday that as the US and Saudi Arabia have had Yemen under an effective state of siege for years, there has been “really no way for Iran to give them substantial support.”

“My assumption is that Iran does give them support, but that support is almost nothing compared to what the Saudis have and what the Emiratis have. It would be almost nothing in comparison.”

Indeed, Sputnik reported in February on multiple exposes by Amnesty International and CNN that showed the extent to which the United Arab Emirates has supplied its proxies in Yemen with Western-made weapons, including American MRAPs, Serbian machine guns and French-made LeClerc main battle tanks. Among the recipients of that aid was Al-Qaeda in the Arabian Peninsula, which controls substantial territory in southeastern Yemen.

Further, Sputnik reported last week that the type of anti-air missile used by Houthi forces to shoot down a US MQ-9 Reaper drone over Yemen earlier in the month, the Soviet-made SA-6 Kub, is so heavily proliferated across the world that US Central Command’s attempt to use it as proof of Iranian patronage is all but impossible.

“So the fact that the Yemeni people, despite the overwhelming support of Western countries for Saudi Arabia, and the infinite amount of money that the Saudis and the Emiratis have spent on waging war against the Yemeni people - the very fact that they’ve been able to stand up and to prevent the United States’ allies or their clients in the region from winning and taking the country shows that this is not a proxy war; this is a popular resistance,” Marandi said.

However, you wouldn’t be able to tell that if you read the Wall Street Journal on Tuesday.

“Yemen’s Houthi rebels have accelerated missile and drone attacks on Saudi Arabia in recent weeks, highlighting the kingdom’s military vulnerabilities in defending itself against an Iranian ally amid a crisis in US-Iran relations,” WSJ’s Jared Malsin wrote.

“Everything points toward the direction that Iran and the Houthis have teamed up for their mutual benefit to increase missile and drone attacks against targets in recent days and weeks,” Fabian Hinz, an independent analyst based in Germany, told the paper for the story.

Marandi told Sputnik the reason why the Western media and Western think tanks call it a proxy war is “because they want to escape the fact that they are not calling out their governments for the crimes against humanity that they are involved in. In other words, they want to create a moral equivalent between the Saudis and the Yemeni people who are being massacred so that they won’t be answerable in the eyes of public opinion.”

“So, they say it’s a proxy war, so it’s, you know, it’s two bad guys fighting each other. This way, when their governments give hundreds of millions of dollars, or in the case of the Europeans, tens of millions of dollars each of weapons to the Saudis or the Emiratis, they don’t have to feel ashamed about it, or they don’t have to shame their governments,” he said.

That said, Marandi told hosts Brian Becker and John Kiriakou that the tide was clearly turning against the Saudi-led alliance, which includes not only the UAE and the Yemeni government-in-exile, but also Sudan, which has sent thousands of warriors from its Janjaweed militia - the paramilitary group responsible for a large part of the genocide in Darfur - to fight in Yemen. Other countries, such as Senegal, have sent troops to fight with the coalition as well.

The Houthis’ September Revolution rode on dissent over the outcome of the country’s 2011-12 revolution, part of the Arab Spring uprisings that saw Saleh thrown from power and Hadi, his vice president, assume Saleh’s former office. The revolution promised to address issues of chronic mass unemployment and a poor economy, as well as to restructure the country’s administration for the first time since North and South Yemen were reunited in 1990.

The Houthis helped make the 2012 revolution, but rejected the federalization proposed by Hadi as a move that would entrench, not alleviate, regional poverty. The final straw came in 2014, when a sharp spike in gas prices, combined with a slew of right-wing proposals by Hadi that included slashing social program funding, drove Saleh supporters into the streets and the ranks of the rising Houthis.

“Now, for the first time, we’re beginning to see the Yemenis go on the offensive, and they are striking vulnerable targets inside Saudi Arabia,” Marandi said. He predicted that in the event of an all-out war between the US and Iran, the Saudis and Emiratis would suffer such terrible consequences in just the first few hours of the conflict that the Houthis or other anti-Saudi Yemeni forces would immediately seize the opportunity and likely invade Saudi Arabia “within days.”

“There would be chaos in these countries,” Marandi noted. “Therefore, it’s not simply Iran. If the United States thinks they can wage a war against Iran and that it will be something manageable, they are deeply mistaken.”