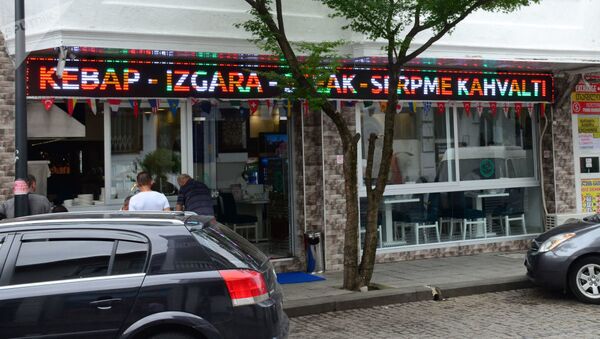 While Georgian protesters are blaming Russians for an alleged expansion, Batumi, the capital of Georgia's Adjara Republic is becoming one that more and more resembles a Turkish city. What price will Georgia’s regions have to pay for being in the same neighbourhood with Turkey?

During the recent riots in the Georgian capital city of Tbilisi, which erupted on 20 June 2019 over the participation of Russian delegates in an Interparliamentary Assembly on Orthodoxy (IAO) session, protesters were discussing the issue of Russia's covert "expansion" in Georgia voiced a week earlier by former Deputy Secretary of Defence Michael Carpenter.

"Just spent 3 days in Georgia", Carpenter tweeted on 18 June. "I’m not sure the government fully understands the implications of its open door policy with Russia. With so many "tourists" (ehem FSB) and so much land being bought up by Russian businessmen, they may wake up one day and find not 20% but 100% occupied".

While the violent protests driven by strong anti-Russian sentiment have already disrupted the flow of Russian tourists to the country after Moscow announced the suspension of air traffic with Georgia starting on 8 July, the question arises as to whether Russian businessmen have really "taken over" the country.

Turks are on Real Estate Buying Spree in Batumi

"They are very clean, friendly ... Not greedy ... The owner from the last floor gives me presents on holidays ... And when my son broke his leg, other owners, from the third floor, gave me money for treatment ... I have four of them, owners, good ones ... they speak Turkish only, but I have almost learned it, but when I don’t understand, my son comes and translates", says Tsiala, a Batumi resident and former biology specialist who turned into a professional housekeeper 20 years ago. 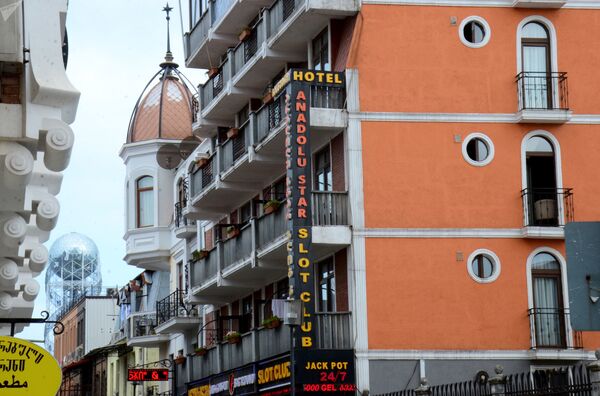 Turkish shops, cafes and restaurants in the capital of Adjara
© Sputnik

Tsiala narrated that out of the 40 apartments in the house where she lives half have been bought by Turks. She and her Georgian neighbours are working as cleaning ladies for those Turkish families.

There are no statistics indicating how many apartments have been bought by Turks in Batumi in recent years. However, Turkish families live in almost every new building in the city. Still, Turks usually buy the real estate not for housing, but for business needs bringing their own staff and hiring locals for low-paying jobs.

Kutaisi, the central street of Batumi, has long been dubbed the "Turkish quarter". The Turkish language is spoken here more often than Georgian. A mosque is located nearby. The whole street sparkles with inscriptions, running lanes, neon signs written in Turkish. At some point you get lost and forget that you are in Georgia.

“It’s easier to do business here", says Omar Farouk, a Turkish restaurant employee. "In Batumi, the economy and infrastructure have just started to develop, so this is profitable for us to come here and start new businesses". 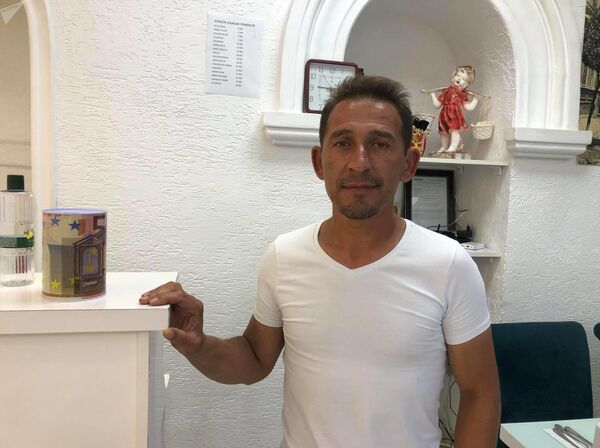 In addition, taxes in Georgia are lower, and labour is cheaper.

“In Georgia service staff costs a maximum of $10 per day, while in Turkey it costs $20-30. Housing is cheaper here", Farouk explains. “Life is cheaper, business is easier, everyone speaks Turkish - life is beautiful, I feel like at home. Hotels, restaurants, hostels and fast food in the area belong to the Turks. The staff is from Turkey, only the waitresses are from Georgia". 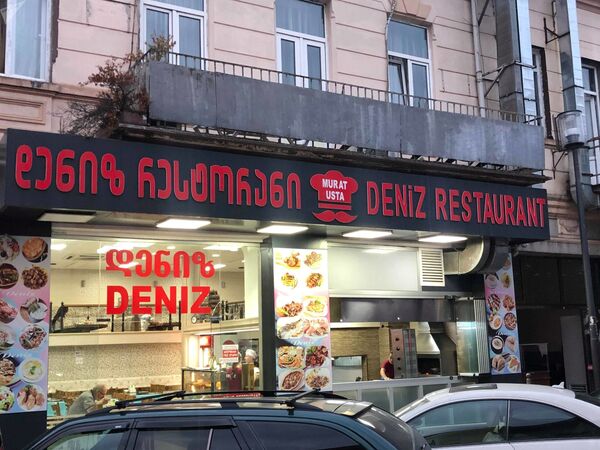 How Turkish Business is Intervening in Adjara

Since the second half of the 19th century Adjara passed from the Ottoman Empire to Russia and back until 1921 when the region was ceded to the Soviet Union, in accordance with the Treaty of Kars. The agreement was struck on the condition that Muslim Georgians would be provided with autonomy. Thus, the Autonomous Republic of Adjara, a region in modern Georgia bordering Turkey, was founded in 1921.

Decades later, Adjara's border with Turkey was formally opened in 1989 making Batumi, the region's capital nothing short of a "capitalist" paradise for Soviets.

In the early 1990s, following the collapse of the Soviet Union, Turkish businesses started penetrating into Adjara. The Turks provided large commodity loans to their trading partners in the region thus forming a pro-Turkey business elite. This silent expansion was accompanied by the promotion of Islamic education among Georgian youth. 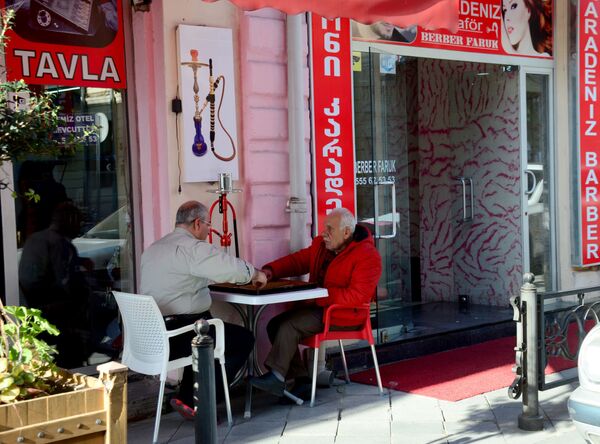 Turkish shops, cafes and restaurants in the capital of Adjara
© Sputnik

The Turks also started investing in gambling and associated services in Batumi. It was a golden opportunity for Turkish enterpreneurs given that Ankara banned casinos in 1998.

However, the Turks additionally engaged in shady business activities including human and drug trafficking which flourished in the region in the early 1990s.

Following Georgia's Rose Revolution of 2003 the spread of Turkish influence continued to gain pace. The first large project kicked off by the Turks was the construction of the Sheraton hotel in the region in 2006. In 2007, they built two airports in Georgia: one in Tbilisi and another one in Batumi. In 2011, Turkish construction companies started "occupying" the Batumi real estate market using loopholes in Georgia's legislation. 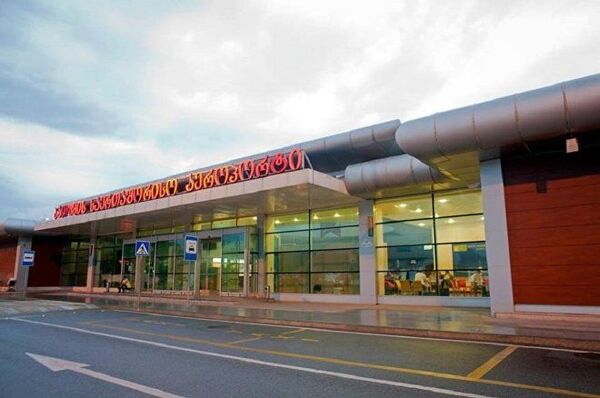 The most considerable investments were made by Turkey in Adjara's energy projects, namely the construction of hydropower plants. According to the Ministry of Economy of Adjara, in 2015, Turkish investments amounted to $107.5 million dollars, in 2016 - $135.6 million, in 2017 - $52.3 million.

"The Autonomous Republic of Adjara has actually become the arena of Turkish expansion", Lortkipanidze says.

“In October 2012, when I was a member of parliament, it turned out that between 2 September and 2 October, 2,223 citizens of Turkey received Georgian citizenship by direct decree of the president of Georgia. Imagine, we are talking about just one calendar month. And if you look at what happened during several years ... It was the promotion of Turkish expansion of an unprecedented scale", the former MP emphasises.

'Is It Possible to Separate Rize From Batumi?'

Thus it is by no means surprising that a few years ago Turkish President Recep Tayyip Erdogan said that Batumi had always been in the heart of the Ottomans along with the cities of Thessaloniki, Aleppo, and Mosul.

“Our physical boundaries are different from the boundaries of our heart", Erdogan said. By way of example, he asked: “Is it possible to separate Rize from Batumi?”

Although Turkey’s ambassador to Tbilisi later insisted that Georgians had “misunderstood” Erdogan’s comment, the Turkish president's statement sounded like an larming signal for the country.

One may say that the scale of the Turkish expansion in Ajara is exaggerated. But this argument does not mean that the problem does not exist. While US and Georgian politicians are crying wolf over the imaginary "Russian expansion", Turkey is continuing to increase its influence and presence in the country.