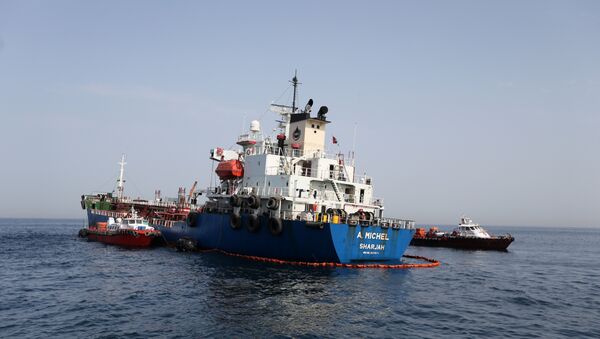 © REUTERS / Satish Kumar
Subscribe
A pair of coordinated attacks against six tankers off the Emirati coast and the Gulf of Oman in mid-May and mid-June prompted the US and its allies to express "grave concerns" and to accuse Iran of being involved. Tehran has denied the charges, calling the attacks beyond suspicious and accusing Washington of escalating the crisis in the region.

The United Arab Emirates needs "clear and precise and scientific" proof before it can assign blame to any country for the 12 May sabotage attacks off its coast which damaged four tankers, including one Emirati vessel, two Saudi ships and a Norwegian tanker, Foreign Minister Sheikh Abdullah bin Zayed Al Nahyan has said.

"We have to be professional about this issue. At the moment, experts are considering it…We cannot blame any state at the moment because we do not have any such credible information", Abdullah noted, speaking at a press conference in Moscow with his Russian counterpart Sergei Lavrov on Wednesday.

Stressing that the UAE was not looking to see "more turbulence" and "more worries" in the region, the Emirati official confirmed that discussions were underway between the US, the UAE and other countries on the creation of a "global coalition" to protect regional oil shipping lanes, but insisted that the measure wasn't aimed "against Iran".

"We discussed several issues during [US Secretary of State Mike Pompeo's Monday] visit. One of them was the Iranian dossier…I confirm that any practical steps are aimed at ensuring the protection of these [tankers] in the Straits, and not against Iran", Abdullah said.

Abu Dhabi previously categorised last month's tanker attacks as "acts of sabotage" and said that it could conclude that a "state actor" was likely behind them, but refrained from naming any one country.

Earlier this month, in the midst of Japanese Prime Minister Shinzo Abe's visit to Tehran for bilateral talks, two more tankers, one of them Japanese, were struck.

Sheikh Abdullah's remarks contrast with those of the kingdom's regional and global allies Saudi Arabia and the United States. Last week, Saudi Foreign Minister Adel al-Jubeir reiterated that Riyadh believes Iran was involved both attacks. The US has similarly blamed Tehran, with Secretary of State Mike Pompeo saying earlier this month that the degree of sophistication and expertise pointed to Iranian involvement. Iran, meanwhile, has dismissed the accusations, saying the US and its allies have presented no evidence to substantiate their claims, and accusing the US of using the tanker incidents to justify Washington's "sabotage diplomacy" to "cover up its economic terrorism against Iran."

The Persian Gulf is a key strategic shipping route, with up to a third of the world's total ship-based oil supplies passing through the waterway annually.