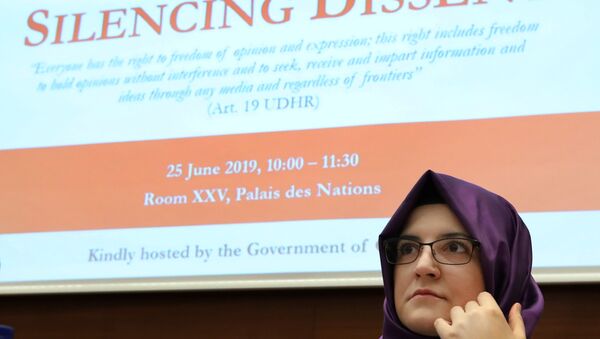 On the heels of a UN report which linked Saudi Arabian Crown Prince Mohammed bin Salman to Jamal Khashoggi’s death, the late journalist’s fiancée is now calling for an international investigation into his murder.

On Tuesday, Hatice Cengiz, the fiancee of the late Washington Post journalist and US resident Khashoggi, appeared at the United Nations in Geneva to appeal for an international probe into her fiance’s October 2, 2018, killing and the alleged cover-up by high-level Saudi officials.

"I don't want this incident to remain on a piece of paper," Cengiz added, referencing the June 19 report by Agnes Callamard, UN special rapporteur on extrajudicial, summary or arbitrary executions.

The aforementioned report says that while US sanctions have been set in place for more than a dozen Saudi individuals, they simply pass the buck and are no substitute for government accountability.

“These must continue. They are important but insufficient. The crime committed was a state killing. These particular sanctions against 17 or more individuals act as a smokescreen, diverting attention away from state responsibility,” reads the 99-page document. “The current sanctions also fail to address the central questions of chain of command and of senior leadership’s responsibilities for and associated with the execution.”

Although Callamard’s report was published in a UN Human Rights Council release, it is not an official document from the UN itself, but rather a report of her findings. The special rapporteur has requested UN Secretary General Antonio Guterres open a global criminal investigation based on her report.

Saudi Arabian diplomat Adel al-Jubeir slammed the report the same day it was released, saying it contained "false accusations confirmed as stemming from the preconceived ideas and positions,” according to Reuters. The minister went on to add that Riyadh provided a progress report on the Khashoggi case to the UN High Commissioner for Human Rights and threatened to take action against the alleged falsehoods reported by Callamard.