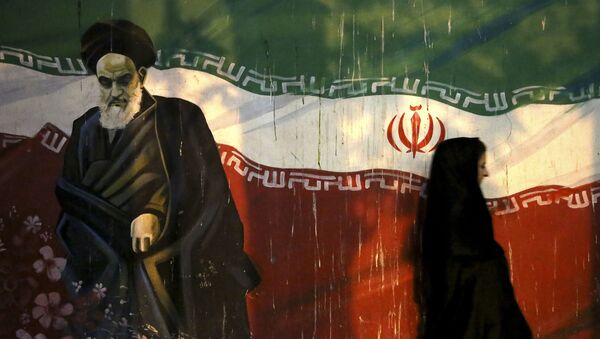 © AP Photo / Ebrahim Noroozi
Subscribe
David Swanson, activist, journalist, radio host and author of the book "Curing Exceptionalism,” told Sputnik that the new US sanctions against Iran are yet another step closer to war, also noting that Democratic candidates for the US 2020 presidential elections are unlikely to discuss Iran during the debates in Miami, Florida, this week.

Speaking to reporters in the Oval Office Monday, US President Donald Trump announced that he had imposed new, "hard-hitting" sanctions on Iran, targeting the country's Supreme Leader Ali Khamenei, who Trump said was responsible for "the hostile conduct of the regime.” Sanctions were also slapped on eight senior commanders of Iran's Islamic Revolutionary Guard Corps (IRGC), Sputnik reported.

While Trump at first said that the new sanctions were a response to the IRGC’s downing of a US drone which Tehran claims violated Iranian airspace, he later said that these sanctions would have been imposed regardless of that incident.

“Well, if it [the sanctions] cuts off communications with all the people that the US government ought to be communciating with, and it leaves only communication by mass murder and destruction ... then it is very significant in terms of yet another attempt to get the US closer to a war against Iran,” Swanson told Radio Sputnik’s By Any Means Necessary hosts Sean Blackmon and Eugene Puryear.

“We have long been in danger of some incident escalating into a war, and we have seen incidents that could have been escalated into a disastrous war and haven’t. That doesn't mean that the next one won’t,” Swanson added. “This needs to be reversed … Potentially, on the upside, each of these steps makes the rest of the world see that the US is intent on a war for its own sake and possibly move against it.”

“I think … if this continues, Trump will be talked into [a war with Iran] it by his advisers, who, after all, he has chosen to surround himself. The notion that Trump understands the fickleness of public opinion - and the tendency of the US public to cheer brainlessly for every new war while it’s brand new and then to turn against it - suggests that Trump would time any war closer to [the] election than we are right now. But the closer we get to that election, the more likely he is to want to start a war,” Swanson continued.

According to Swanson, presidential candidates are rarely asked about pressing issues at debates, and so Democratic candidates debating on Wednesday and Thursday aren’t likely to discuss tensions between the US and Iran.

“There is not a whole lot of opening for candidates to insert topics that they aren’t asked about. I think that [Hawaii Rep.] Tulsi Gabbard has chosen to make war and peace a topic of her campaign and is likely to bring it up whether or not she is asked. That being said, her position on war and peace is not the best among other candidates in the race,” Swanson explained.

“The best by far in terms of written policy positions is [former Alaska Senator] Mike Gravel, who is locked out of the debates, at least the first round,” he continued. “I think [Vermont Senator] Bernie Sanders, having been moved in part by an open letter that many of us signed demanding that he do better on foreign policy than he did last time around, has moved dramatically in the right direction. I think [Massachusetts Senator] Elizabeth Warren has moved somewhat in the right direction.”

However, there is a lot of “fluff” in presidential debates, Swanson added.

“The big topics would never be asked about … such as ‘Roughly how many hundreds of billions would you like where in the federal budget?’ ‘Is 60% for militarism too much, too little or just right?’”

“There will be fluff. ‘Who is your hero?’ ‘What is your favorite book?’ ‘Who would you like to have a beer with?’ Nonsense, because they think people want that crap. There will be lots of horse race stuff. ‘How do you feel that everyone to your right and left has raised 10 times more money than you have?’” Swanson added.

“The fluff and the nonsense that the corporate media promotes ... also leads to an emphasis on tokenism. Let’s have another walking disaster as a president but a female one, or a black one or a gay one. It’s hard to address this topic without sounding like you don’t care about women’s rights or blacks’ rights or gay rights, but the fact is, I do. But there is this push to think of elections as electing a prom king or queen … rather than an approximation of democracy … That’s probably the biggest flaw I see in these debates,” Swanson continued.

000000
Popular comments
"But there is this push to think of elections as electing a prom king or queen …" is my interwebs quote of the day.