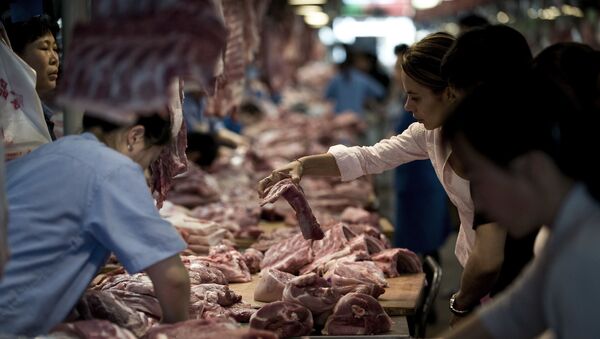 © AP Photo / Andy Wong
Subscribe
Beijing's attitude towards Ottawa soured in December 2018, when Huawei executive Meng Wanzhou was detained in Vancouver at Washington’s request. The incident was followed by China's arrest of two Canadian nationals who were accused of spying.

China has stopped importing meat from Canada, the National Post, a Canadian newspaper, cited an unnamed spokesman for the Chinese embassy as saying.

The spokesman explained that the decision comes after the feed additive “ractopamine”, which is permitted in Canada but banned in China, was found in Canadian pork shipments.

He added that about 188 “forged” veterinary certificates were delivered to “the Chinese regulatory authorities through Canada's official certificate notification channel”, which the spokesman claimed indicates that there are “obvious safety loopholes” in the Canadian meat export supervision system.

“In order to protect the safety of Chinese consumers, China has taken urgent preventive measures and requested the Canadian government to suspend the issuance of certificates for meat exported to China, effective June 25,” he pointed out.

The Canadian Department of Agriculture and Agri-Food did not comment on China’s move, but referred to “inauthentic certificates” as a “technical issue”, which the Department said is already being investigated by law enforcement agencies.

Canadian Agriculture Minister Marie-Claude Bibeau, for her part, reportedly pledged that the government will “always stand shoulder to shoulder with our producers and workers, who export the finest products around the world”.

The developments come amid a chill in Canadian-Chinese relations which worsened after the arrest of Meng Wanzhou, the chief financial officer of Chinese tech giant Huawei. She was detained in Vancouver in December 2018 at the request of US authorities on suspicion of violating Washington’s Iran sanctions. Beijing responded by detaining two Canadian nationals, Michael Kovrig and Michael Spravor, on suspicion of violating Chinese national security. Beijing, however, denies that this move, which was described by Ottawa as “illegal and arbitrary”, was related to Meng's arrest.

China is normally the world's second-largest customer of Canadian pork, and Canadian beef exports to China were reportedly worth $63 million year-to-date.