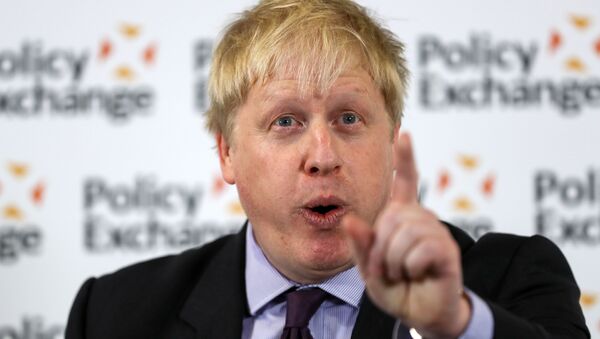 Neil Clark
All materials
Tory leadership front-runner and Prime Ministerial hopeful Boris Johnson has done many jobs in his time, from editing the Spectator magazine to being Foreign Secretary, but it’s almost  forgotten today that he’s also been a war correspondent, reporting from the Federal Republic of Yugoslavia, during the time of the NATO bombing campaign.

Johnson’s despatches from Belgrade in the spring of 1999 were published in the Daily Telegraph and make interesting reading twenty years on. You can hardly accuse him of peddling neocon propaganda.

Johnson called the assault on Yugoslavia, which lacked UNSC authorisation, ‘a miserable war’.

‘War is stupid. War is hell. But never has there been a war so stupendously incompetent in matching methods to aims’ he declared. 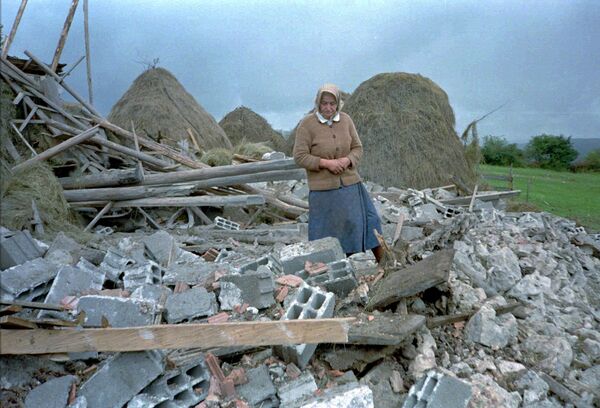 An unidentified Serb woman inspects debris of her home, destroyed in NATO air-strikes in the village of Vidrici, near Sokolac, some 50 kms northeast of Sarajevo Wednesday Aug 30 1995
© AP Photo / STR

Unlike others, he didn’t attempt to whitewash NATO’s actions. ‘NATO succeeded in decapitating a priest as he crossed a bridge in broad daylight on the feast of the Holy Trinity. They killed a toddler as she sat on her potty. Of course, this was not intentional, in the sense that some brasshat at Mons did not target this priest of that toddler. But you could say that it was intentional in that NATO dropped bombs from 15,000 feet in the sure-fire knowledge that civilians would be killed.’

Johnson finished that particular article by saying that if there was to be a NATO ‘victory parade’ at the end of the war, he hoped there would be a man behind Clinton and Blair in their chariot to whisper in their ears ‘not only of their own mortality but also of the mortality of the people they claimed to be protecting’. 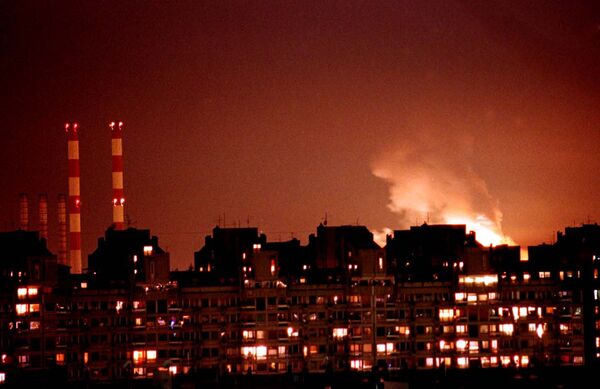 While condemning violence from Serbian paramilitaries against Kosovan Albanians, Johnson refused to indulge in Serbophobia, which was so fashionable in western circles in the 1990s.  ‘Call me a dupe, but I seem to like most of the Serbs I have met, and feel sorry for them’ he wrote in an article entitled ‘The Serbs will blame us and they will have a point‘.

The war against Yugoslavia was of course prosecuted by a Labour government in Britain, so perhaps Johnson’s strong criticism of the way it was waged can be seen (at least in part) as party politicking.

Yet just a few years later Boris had changed his tune. I remember asking him at a party of a mutual friend, just a few days before the illegal invasion of Iraq in 2003, whether he believed the guff about Saddam Hussein having Weapons of Mass Destruction which could be assembled and launched within 45 minutes. Johnson looked at me, paused and then replied:  ’You’ve got to admit Saddam is not a frightfully nice chap’. 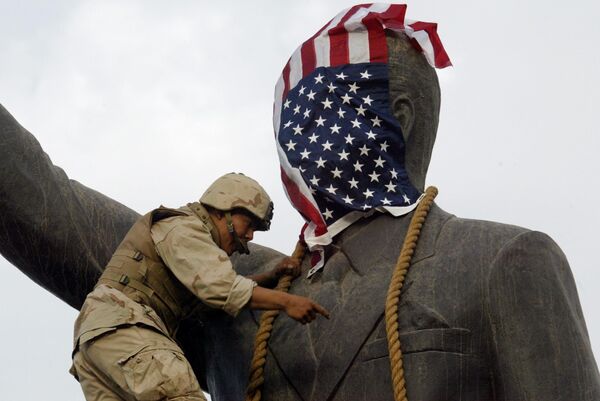 A US Marine covers the head of a statue of Iraqi President Saddam Hussein with the US flag before pulling it down in Baghdad's al-Fardous (paradise) square 09 April 2003 as the marines swept into the Iraqi capital and the Iraqi leader's regime collapsed.
© AFP 2022 / Ramzi Haidar

Writing in the foreword of his 2006 book ’Have I Got Views for You’, Johnson said that in relation to his war reporting from Belgrade: ’I think, in retrospect, that I failed to see the wood for the trees; and that has made me approach the second Gulf War with a more open mind’. He went on ‘You can say what you like about Blair. But he has participated in the toppling of two tyrants, Milosevic and Saddam, whom (John) Major had left in power‘.

Johnson also lauded Tony Blair for forming as close a link with a right-wing Republican President George W. Bush, as he had done with a Democrat, Bill Clinton.

The man who had declared ‘War is stupid. War is hell’ in 1999, had come to accept Blair’s military interventions.  Yet that still didn’t stop him saying in 2014 that someone who had called for Tony Blair to be imprisoned over the Iraq War had ‘his heart in the right place’.

That same year Johnson said that Blair’s argument that the violent insurgency sweeping Iraq had nothing to do with the 2003 invasion was ‘unhinged’.

Fast forward to March 2016 and Johnson having served two terms as Mayor of London, is writing in the Daily Telegraph about Syria. It’s as if the old  Belgrade Boris has come back to life. In a column entitled: ‘Bravo for Assad- he is a vile tyrant but he has saved Palmyra from ISIL‘, Johnson said he couldn’t conceal his ‘elation’ as the Syrian Arab Army recaptured the ancient city from the terrorists.

The piece followed on from another in which Johnson had argued for a WW2-style Grand Alliance with Britain, the US, Syria and Russia coming together to defeat said, terrorists.

These articles would only have increased fears in the neocon establishment,  centred around the Rupert Murdoch media empire, that Johnson was not a ‘true believer’ in regime-change projects and may have helped sabotage his leadership campaign in 2016, as I argued here.

But as soon as Johnson became Foreign Secretary he flip-flopped again. He went from ‘Bravo to Assad‘ to ‘Assad must go‘ in a matter of months, performing a similar U-turn to the one he had done in relation to the war against Yugoslavia.

All the evidence shows us that Boris Johnson, like Donald Trump, is not by instinct a warmonger, or an obsessed ‘regime-changer’, but will go along to get along. Reporting from post-invasion Iraq in 2003 Johnson made a most revealing admission. ‘I wrote, spoke and voted for the war, and was hugely relieved when we won. But owing, no doubt, to some defect in my character, I found it very hard to be gung-ho'.

Doesn’t it tell us plenty about the political space in which Johnson operates that he sees not being ‘gung -ho’ as a character defect?