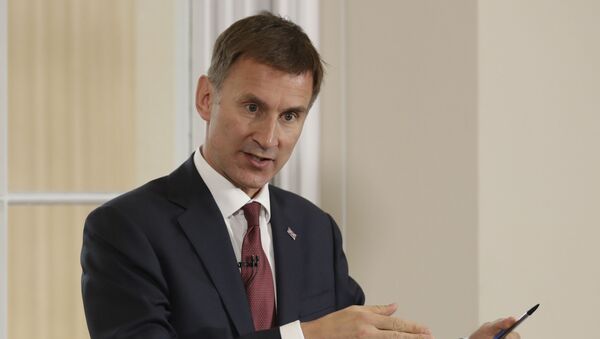 Although the UK officials, including Conservative party leadership contender Jeremy Hunt, have proclaimed de-escalation in the region, he admitted that London would consider Washington’s request for military support amid the growing tension between Iran and the US.

Foreign Secretary Jeremy Hunt, who is running against Boris Johnson for the Conservatives’ leadership, has pledged to stand by the US even if its confrontation with Iran leads to a military conflict, according to The Daily Mail.

“We will stand by the United States as our strongest ally but of course we have to consider any requests for military support on a case-by-case basis,” the prime minister hopeful confirmed while campaigning in Scotland.

He admitted that London is “constantly in touch” with Washington. He also expressed the belief that that the solution is for Iran is “to stop its destabilising activity throughout the Middle East” and voiced concern about the recent incident with the two commercial vessels in the Sea of Oman near the Strait of Hormuz. He branded it sabotage, adding that the culprit “is almost certainly Iran.”

“We want to de-escalate the situation but we are of course extremely worried,” he reportedly said.

In another interview with BBC radio, he claimed that the UK has been doing “everything we can to de-escalate the situation" that he referred to as "very dangerous” and remained closely in touch.

He also claimed that the UK does not think that both Iran and the US want a war, but noted that it could be an “accidental conflict”.

His remark came amid Andrew Murrison’s trip to Iran; the UK’s Minister of State for the Middle East is there on a peace-making mission. The Foreign and Commonwealth Office (FCO) said that he would “call for urgent de-escalation in the region and raise the UK and international concerns about Iran’s regional conduct and its threat to cease complying with the nuclear deal to which the UK remains fully committed”.

At the same time, The Mirror reported that UK Special Boat Service frogmen, who are trained to remove mines from vessels, perpetrate underwater attacks as well as counter foreign troops, and highly-trained Royal Navy divers have been deployed to the Persian Gulf “as part of a deterrent”.

Tensions have been on the rise between the US and Iran since Washington pulled out of a nuclear deal and imposed sanctions on the Islamic Republic last year. Tensions rose further recently after Washington accused Tehran of attacking oil tankers and warships that had been deployed to the Persian Gulf.

The confrontation reached a new level after Iran downed a US Global Hawk spy drone. Following the incident, US President Trump claimed that he had cancelled a retaliatory strike just 10 minutes before it was to take place, later announcing that military actions against Tehran were still on the table.