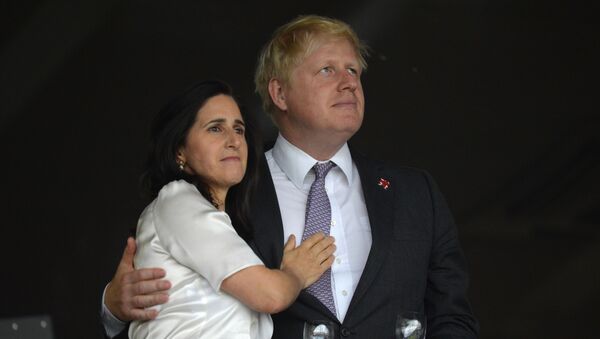 Boris Johnson and his wife of 25 years, Marina Wheeler, confirmed their intention to get divorced last September after The Sun published a story detailing claims that he had been unfaithful.

They claim that the 55-year-old Johnson finds their divorce very painful and is agonising over whether he should try and get back together with Wheeler. But even though he "would like what he had before", Wheeler will never have him back.

"This is a classic example of Boris wanting to have his cake and eat it", one friend was cited as saying.

The sources went as far as to assume that Johnson's alleged willingness to reconcile with his ex could be behind a string of bitter rows with Carrie.

"He is yearning for Marina and wistful and would like what he had before. But there is no way on earth Marina would sanction any of that. She knows what Boris is feeling and Carrie probably knows what he’s feeling, too, which may explain their row", one friend said.

The rumour echoes a report by The Sun, claiming that Johnson and Symonds have had four explosive fights in six weeks.

"Carrie and Boris have an incredibly volatile relationship - this was by no means the first explosive row they've had. The past six weeks have been especially testing for them both. They've had a series of corrosive arguments, with things obvioulsy coming to a head on Thursday. But they very nearly split up at the start of the month", The Sun quoted a friend as saying.

These speculations come days after a conflicting report by The Mirror that Johnson is hoping to finalise his divorce from Wheeler within six weeks in order to "move on" with his girlfriend.

If the former UK foreign secretary, who is vying to assume the top government post amid the ongoing Brexit chaos, wins the race, and the marriage rumours prove true, he could become the first incumbent prime minister to have a wedding in over 200 years.