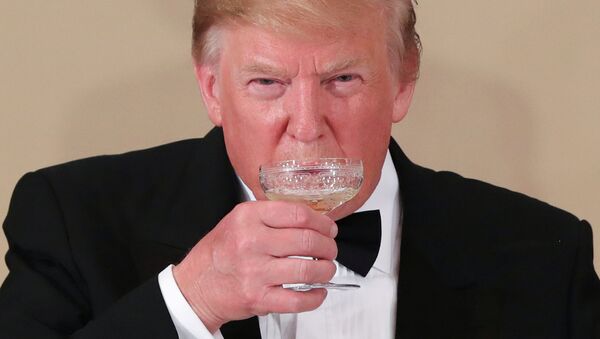 US President Donald Trump said in an interview that he is interested in direct talks with Iran without preconditions. At the same time, he dismissed the European point of view that Tehran is complying with the 2015 nuclear deal, arguing that it is EU business interests talking.

Trump commented on Washington’s point of view on the 2015 Joint Cooperative Plan of Action (JCPOA) nuclear deal with Iran in a Sunday interview with NBC’s Chuck Todd, saying he would accept any kind of deal with Iran, as long as it prevents Tehran from getting nuclear weapons. Trump suggested that he has no issue with the deal being bilateral or multilateral.

“I don't care which, what kind of a deal. It can be separate or it could be total,” he said.

Speaking about his reasons to abandon the treaty, Trump noted that, according to the deal, Iran has limited its uranium enrichment to 3.67 percent for 15 years. Once the deal expired, Tehran would have had a “free pass” toward obtaining nuclear weapons, Trump said.

When NBC’s Todd noted that Iran has consistently adhered to the JCPOA, Trump claimed that there were unnamed facilities in Iran that international inspectors were not granted access to, thereby supporting his suspicion that Iran was pursuing a nuclear weapons program in those places.

When Todd commented that the EU signatories of the deal believe that Iran is complying with the terms of the deal, Trump dismissed them, saying that Europe has business interests in Iran.

“I don’t care about the Europeans,” he said. “The Europeans are going out and making a lot of money […] In France, they’re selling cars to Iran. They’re doing other things.”

Trump noted that Washington is “very good to Europe” and “takes care of them.”

“NATO, we spend a tremendous amount [...] On trade, the European Union’s taken, really, they have really taken advantage of us for a long time,” he asserted.

Trump confirmed that he would negotiate with Iran if the talks have “no pre-preconditions.” He raised, however, a precondition of his own: Iran “can’t have nuclear weapons.”

“Here it is. Look, you can’t have nuclear weapons,” Trump said on NBC. “And if you want to talk about it, good. Otherwise you can live in a shattered economy for a long time to come.”

Trump claimed that the Iranian economy is “absolutely broken,” and that Tehran is addressing record-high inflation due to US sanctions.

He added that would prefer to have talks rather than going to war with Iran, but promised that, should a war begin, it would lead to “obliteration.”

The interview comes as bilateral tensions between Washington and Tehran, raised following Trump’s unilateral abandonment of the 2015 nuclear deal and “maximum pressure” policy, rose again earlier this week after Iran downed US spy drone which it claims violated Iran airspace.

Iran has repeatedly stated its intention to adhere to the JCPOA, commonly referred to as Iran nuclear deal. After the US abandoned the deal in 2018, Iran demanded that European signatories provide Tehran with a mechanism that would allow it to trade in circumvention of US sanctions.

The EU has created an INSTEX special payment vehicle, but Iran was disappointed with its effectiveness. On 8 May, 2019, Iran announced it would resume enriching uranium past the 3.67 percent threshold and continue stockpiling enriched uranium and heavy water until an effective mechanism is established.