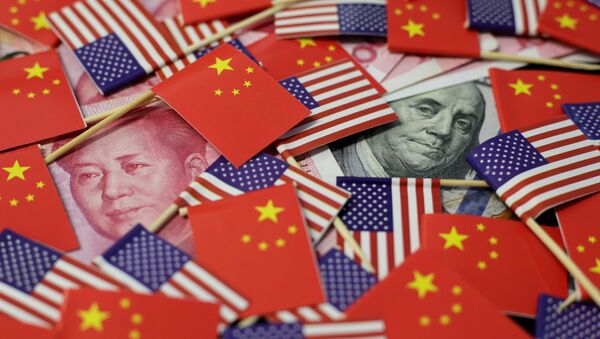 Apple is considering moving some of its production away from China, according to media reports. The Nikkei Asian Review said on Wednesday that the US tech giant may move between 15 and 30 percent of all iPhone production out of China amid the ongoing trade dispute between Washington and Beijing.

Apple has asked its major suppliers to assess the cost of a restructuring of its supply chain, and, as 90 percent of Apple’s products are assembled in China, the move may prove costly.

The world’s two largest economies have so far failed to reach a trade deal despite prolonged negotiations.

The US blacklisted Chinese telecoms firm Huawei in May, effectively barring it from doing business with American companies, further escalating the situation.

Credit rating agency Fitch released a statement this month warning that Apple, Dell, and HP might be put on China's "unreliable entities list" if it retaliates over the Huawei issue.

“The broader issue is the US-China trade war that has put uneasiness and uncertainty into the marketplace. The resolution in a win-win face is essential for future stability. However, this situation has highlighted geopolitical risks for all companies that do business with China. Therefore those businesses that have major stakes with China should be doing risk assessment analysis so they don’t get caught off guard in the future”, William Ho, an analyst at 556 Ventures, said.

Nikkei reported that many key iPhone assemblers like Foxconn, Pegatron, Wistron and other major providers, are looking into other regions including Mexico, India, Vietnam, Indonesia, and Malaysia.

Adam Ni, a China researcher, says that there will be increasingly more companies that will be looking to shift production out of China if the current impasse drags on.

“There are a number of major factors that go into such decisions, including cost, political risk in host countries, availability of skilled or semi-skilled labor, and a favorable business environment. I think some Southeast Asian countries are quite attractive, especially Vietnam and Indonesia. But I think big multinationals will be looking to diversify their supply chains in the current environment to mitigate some of the risks associated with US-China competition”, Ni explained.

Foxconn founder Terry Gou has also urged Apple to move its manufacturing out of China, Bloomberg reported this week.

Sourabh Gupta, an Asia-Pacific strategic and economic policy specialist, said that the value added in each iPhone in China is really not that much, and what Apple needs is low-cost electronic assembly bases, so if that is provided by other countries then it would rather move its production elsewhere:

“For Apple, it just comes down to the cost of production; and tariffs have become a real problem for them, and therefore they want to move out of China. But they realize also they have consumers in China, so they want to also maintain a certain degree of production capacity there”, Gupta said.

Last month, tensions in the US-China trade war escalated after the Trump administration increased tariffs on $200 billion of Chinese goods to 25 percent. In addition, Trump threatened to introduce further tariffs valued at approximately $300 billion, which will include phones, laptops, and tablets manufactured in China, and the implications for Apple will be far-reaching as its products will be affected.

The tech industry warned that it will be forced to raise prices if the White House imposes new tariffs.

Apple said in a letter, released on Thursday, to US Trade Representative Robert Lighthizer “not to proceed with these tariffs". The tariffs would make it tough for Apple to compete against Chinese companies and put it at a disadvantage, Apple wrote.

But the Trump administration will not lift tariffs in the near future because the underlying issues have not been resolved, Ni believes:

“China will not change its state-led economic model and accept the reform that would be required to satisfy the US. We should expect a continued escalation until the cost to both sides reach a point that it forces them to the table. Until then, I don't see an easy way out of the current impasse. Of course, a trade deal would not address the deeper trends pushing the two countries towards confrontation. At best, it could start a process of negotiated compromise on broader strategic questions, but most likely any agreement will be partial and tactical in nature”.

Sourabh Gupta said that with regard to China specifically, Trump has anxieties of his own.

“He [Trump] initiated tariffs as a means to bring China to the table and to extract a deal from China on favorable terms. He’s got a fairly favorable deal on the table, but not as much as he wants. Now, Trump is in a dilemma of his own making because he actually wants the China trade war to end because if that continues, it can really hurt his re-election prospects in a significant way. So, Trump is right now in a dilemma as to at what point does he call off the trade war with China and does he get enough at the point at which he calls it off”.

Trump and China's President Xi Jinping are expected to hold talks on the sidelines of the G-20 summit in Osaka, Japan that will be held on 28–29 June, but experts point out that a possibility of a meaningful consensus on trade and broader strategic questions is very low.

“Both Xi and Trump face powerful domestic constituents that are against a quick deal. For this and a range of other reasons, both Xi and Trump are constrained in what they can offer each other in Osaka. Most likely, the two leaders will affirm their desire for constructive and continued dialogue”, Ni said.

Gupta, in turn, believes that Trump and Xi will not have anything resembling a final agreement per se, but will agree to continue trade negotiations.

“President Xi and President Trump will have to decide at what point in the course of that retraction they are comfortable with at both ends to have something which resembles a win-win bargain”, Gupta said.

The economic policy specialist added that “what needs to be done and needs to be seen is whether Trump and Xi will be able to have some rough and ready compromise, in principle on the enforcement-related aspects of their deal, which can subsequently get negotiated and finalized by their senior officials. And I’m looking to see if there is a consensus on that aspect, and my view is that the two sides will make enough progress in Osaka to ensure that they can proceed with the negotiations and close it out thereafter”, Gupta concluded.