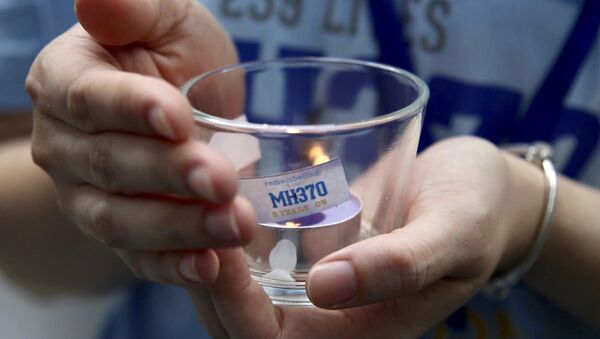 © AP Photo / Annice Lyn
Subscribe
The Malaysian Airlines flight disappeared in 2014, but its fate remains unknown because the plane or debris has never been found, except for several pieces allegedly belonging to it.

William Langewiesche, a former pilot and an aviation expert, has shared with The Sun that a famous MH370 sleuth, who found several parts allegedly belonging to the plane on the shores of Mozambique, La Reunion and Madagascar, Blaine Gibson has started receiving "death threats" with demands to stop his investigative activities.

"One message said that either he would stop looking for debris or he would leave Madagascar in a coffin", the former pilot said.

The first messages reportedly started appearing soon after Gibson received his first finding allegedly from flight MH370 – it was a triangular piece of the plane's wing with words "no step" written on it.

Langewiesche claims he met Gibson in Kuala Lumpur, where the latter is purportedly hiding , fearing he could be spied upon.

"He frequently swaps out his Sim cards. He believes he is sometimes followed and photographed", the aviation expert added.

Malaysian Airlines flight MH370 disappeared on 8 March 2014 while carrying 239 people from Kuala Lumpur to Beijing. The official investigation, which lasted for several years after the plane's disappearance, has failed to reach any conclusion on the reason why the MH370 changed its course and where it ended up after that.

The aircraft’s remains have still not been found, and multiple enthusiasts are pursuing different theories in a bid to locate where the plane crashed or landed.