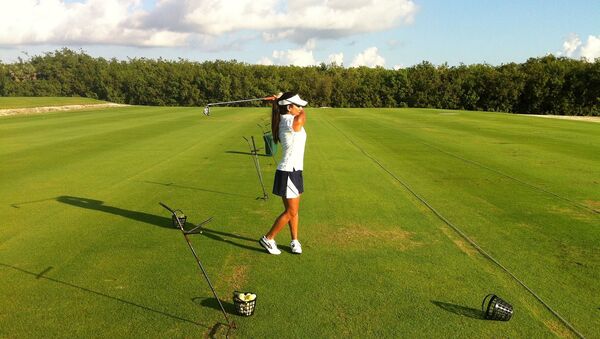 The golf days slated for mid-August hit media headlines after pop-ups emerged advertising the “sexiest and naughtiest” sporting event Britons will ever see.

A men-only event, The Sink the Pink – Big Boy and Bigger Golf Day, although planned for as late as 16 August, has already stirred massive controversy after saucy ads emerged promoting "naked birdies" golf day to take place at a “secret course in Essex,” The Sun reports.

The advertisement is worded in a perfectly colloquial manner, promising participants “forbidden pleasures”.

"We pride ourselves in offering the 'boys' a very naughty round of golf and an overall super-sexy day filled with forbidden pleasures, oh, and you also get to play golf," reads the pop-up advert, which appeared on the 4Play Productions website coupled with an image of an attractive blonde female golfer in hot pants and heels. Per the organisers, the bar, which will offer services including free drinks, will be manned by naked women, and a 22-seater hot tub is expected to be stocked with naked women.

Male participants are promised a wet T-shirt contest and a “girl-on-girl show” to accompany their hosted booze party, which one organiser called 'Steve' said will definitely “take off” on English soil after similar men-only events became a hit in South Africa.

What the organizers have promised to be “the sexiest and naughtiest golf day to hit the UK” has, nevertheless, caused indignation among female players - and not a few men as well - in a game dominated by men.

"This is just horrendous and takes the sport back centuries. It is a million steps back in time,” adding that in the largely male sport, she regularly gets looks while on the course from men that “expect me to be rubbish.”

Lauren Johnson, from Women's Golf Content, echoed the stance, noted that until recently, many gold clubs prohibited “dogs and women” from entering. "That tells you all you need to know about the sport,” she observed, adding that it’s high time for a “tide change.” She suggested that the models employed to work naked in the show “take a long, hard look at themselves.”