Trump Says Never Called Iran Strike 'BACK', But Stopped It Going Forward 'At This Time' 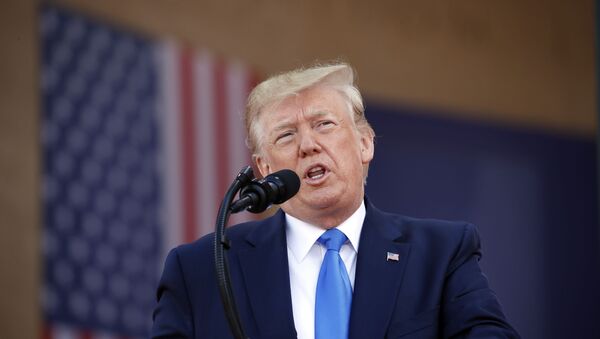 On Friday, US President Donald Trump said that he had halted a "retaliatory" military strike against three sites in Iran just 10 minutes before it was set to be carried out, after deliberating that an estimated 150 Iranians would die in the attack.

US President Donald Trump tweeted that reports regarding his decision not to conduct a military strike against Iran were misleading, claiming that he never said he had "called the strike against Iran BACK," but rather "just stopped it from going forward at this time."

The statement comes following the president's announcement of new "major additional Sanctions on Iran," slated to take effect on Monday.

On Thursday, the Islamic Revolutionary Guard Corps (IRGC) downed a US RQ-4 spy drone that Tehran claimed was operating in Iran airspace, a statement dismissed by the US.

Following Thursday's downing of the surveillance drone, a US military strike against a series of Iranian targets, including radar and missile batteries, was reportedly ordered.

On Friday, Trump confirmed previous reports that he had "stopped" the operations just 10 minutes before it was set to be carried out, after finding out that about 150 people would die in the attack.

​Trump in an interview with NBC News later restated that he made the decision not to go forward with the military operation after speaking to generals about casualties.

"They came back and said, 'Sir, approximately 150.' And I thought about it for a second. I said, 'You know what? They shot down an unmanned drone...and here we are sitting with 150 dead people'...And I didn't like it. I didn't think it was proportionate," Trump said.

The downing of a US Global Hawk spy drone this week is the latest in a series of diplomatic rows between Washington and Tehran that have been escalating since the unilateral US withdrawal from the 2015 Joint Comprehensive Plan of Action (JCPOA), also known as the Iran nuclear deal, in 2018.