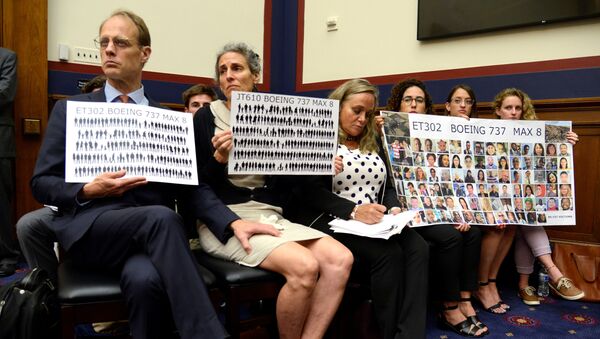 As of May, Boeing asserts that its 737 MAX is ready to return to the skies following a software update, but others are skeptical about the company’s closeness to the US Federal Aviation Administration (FAA) and what the agency’s history of so-called checks and balances may mean for public safety.

Sullenberger notably saved 155 people on January 15, 2009, by landing an Airbus A320 safely in the Hudson River after both of the aircraft’s engines were disabled.

“Our current system of aircraft design and certification has failed us,” Sullenberger said during the hearing, blasting both the FAA and Boeing. “It is clear that the original version of MCAS was fatally flawed and should never have been approved.”

To further break down how Sullenberger arrived at this assessment of the company’s actions and the federal aviation body’s hand in the matter, Radio Sputnik’s Loud & Clear was joined by National President of the Association of Professional Flight Attendants Lori Bassani and Dennis Tajer, a spokesperson for the Allied Pilots Association.

Tajer, who is also an American Airlines pilot trained on Boeing 737 planes, explained to hosts Brian Becker and John Kiriakou that the main flaws stem from the fact that “in the certification process, there are human beings, and those human beings can be influenced insidiously or directly, through intimidation or through a poor structure that is set up.”

“The checks and balances obviously failed. The arms-length distance the FAA is supposed to have with Boeing are being called into question by our government and by our investigative agencies,” the pilot added.

He went on to say that it is “unacceptable” how the FAA simply allowed Boeing’s Maneuvering Characteristics Augmentation System [MCAS] to advance through the certification process on the company’s word alone, rather than run its own diagnostics to see what would happen in the event of a stall or failure by the aircraft.

“They’re not a subsidiary to Boeing. They are supposed to be an independent agency that helps regulate this industry,” Bassani said in agreement with Tajer.

Though Bassani is not a pilot, Boeing allowed her to try out the E-cab, which is a stationary engineering flight simulator that is supposed to give the operator “full fidelity,” according to Boeing. In recounting her experience on the simulator, Bassani claimed she did get a sense that Boeing was alert and listening to her while she got a better sense of what pilots go through in the cockpit.

Tajer explained that the early version of the E-cab may have been to blame for pilots’ initial confusion. The pilot said that within the simulator, “while the MCAS software was reflective, the actual manual trimming, which is the recovery technique, was not reflective of the aircraft,” meaning the actual aircraft’s resistance during trimming was higher than pilots expected from training.

This was a reported factor that may have contributed to the downing of Lion Air Flight 610 and the deaths of 189 people in October 2018.

“You don’t want to have pilots have their first experience in the aircraft. You want it in the simulator, so they can have the muscle memory, the confidence and the experience for these very challenging events,” Tajer noted in agreement with Sullenberger, who expressed the same sentiment during his testimony.

From a flight attendant’s perspective, Bassani revealed that she has noticed something many passengers are quick to point out: seating is getting more cramped.

“They are jamming so many seats into the interior of the aircraft that it really would, I believe, impede our progress of evacuating these aircraft,” she stressed, looking at the situation through a risk management lens.

To remedy this recipe for added panic in the event of an emergency, Bassani, firmly stating that “lives are not for sale,” suggested airliners take into account the opinions of flight attendants who have experienced these high-stress events, rather than viewing each part of the aircraft as for-profit real estate.

In concluding, Tajer expressed that he holds no animosity toward Boeing, as he first began flying in the military on Boeings, and various Boeing aircraft have kept him safe over the years. However, in this particular case, the pilot believes that an “upper management” problem is afoot and suggests it’s going to take pilots and crew forming a “safety culture team” to make an impactful change on the company and FAA.