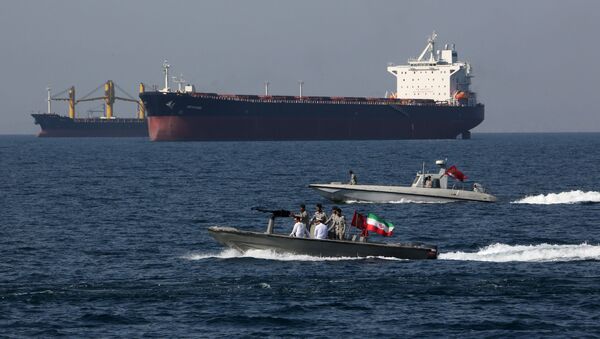 © AFP 2022 / ATTA KENARE
Subscribe
The downing of the US surveillance drone near the Strait of Hormuz and the earlier Gulf of Oman incident has further ramped up tensions between Washington and Tehran. Academic Dr Alam Saleh and Professor Alexander Azadgan shared their insights on what is behind the growing tensions and whether Trump will resort to the use of force against Iran.

On 20 June, Iran shot down a US RQ-4 Global Hawk surveillance drone which, according to Tehran, was in full stealth mode and engaged in a spying operation near Kuhmobarak in the southern province of Hormozgan.

According to Iran’s Ambassador to the United Nations, Majid Takht Ravanchi, despite repeated warnings, the American unmanned aerial vehicle entered the Iranian airspace where the country's air defence forces shot it down in accordance with Article 51 of the United Nations Charter.

"Iran made a very big mistake!" US President Donald Trump tweeted Thursday following the downing of the US drone. Reportedly, Trump considered a military response to the move by Iran but then abruptly called off the decision.

​"United States’ so-called maximum pressure has failed to bring Iran to the negotiation table", said Dr Alam Saleh, a lecturer in Middle Eastern politics at Lancaster University, UK. "Washington thus to put Iran under greater pressure has developed its attitude to the military, to frighten Iran and to ensure its regional allies that it is up to it".

US-Iranian tensions are continuing to escalate following the 13 June Gulf of Oman incident when the Japanese Kokuka Courageous and Norwegian Front Altair oil tankers were attacked while crossing the Gulf of Oman on their way southeast in international waters.

Washington rushed to blame the assault on Tehran with President Trump insisting on 14 June that Iran "did do it", something that Iran resolutely denies. The American version of the event was later challenged by the Japanese who stated that their vessel had been targeted by a "flying object" not a mine, as Pentagon officials earlier claimed.

The strikes prompted Washington to further beef up its military presence in the region by dispatching US Navy destroyer USS Mason (DDG-87) to the Gulf of Oman and sending 1,000 extra troops to the region. Earlier, in May, the US deployed the Abraham Lincoln Carrier Strike Group and B-52 Stratofortress bombers to the Persian Gulf.

"From all the signs we’ve been getting, certainly, the standing of the US Abraham Lincoln aircraft carrier along with all the ships that accompany it, these are not good signs", noted Alexander Azadgan, professor of international policitical economy, a senior geopolitical analyst and Editor-at-Large with UWI (United World International).

Azadgan refuted the idea that Tehran could be behind the Gulf of Oman strike on the Japanese vessel amid Prime Minister Shinzo Abe's state visit in Iran: "[The Iranians] aren’t stupid, they are not suicidal; quite the contrary, they are very intelligent, crafty and wise in their foreign policy".

According to the geopolitical analyst, there are several reasons behind the increase in pressure on the Islamic Republic.

First, Iranian regional rivals are apparently trying to jump at the opportunity to goad Tehran into a new war amid growing tensions between the US and Iran, he noted referring to the United Arab Emirates, Saudi Arabia and Israel. Azadgan suggested that the Emiratis could be behind the recent attack in the Gulf of Oman.

At the same time, he did not rule out that the incident was a "false flag" operation akin to the Gulf of Tonkin clash that later translated into the Vietnam War.

Second, Trump administration officials, National Security Adviser John Bolton and Secretary of State Mike Pompeo, who are currently in charge of US Middle East policy, have long advocated a coup d'etat or use of force against the Islamic Republic.

#JohnBolton 8 months ago among MEK supporters tells them they will overthrow #Iran’s regime and celebrate in #Tehran with Bolton himself present, “before 2019” pic.twitter.com/H7oaaU3faU

​Previously, on 1 July 2017, Bolton vowed to instigate a regime change in Iran "before 2019" at a gathering of the dissident Iranian group Mujahedeen-e-Khalq (The People's Mojahedin Organization), known as MEK or MKO.

Third, the geopolitical analyst underscored that above all this is "an oil pipeline war about all these competing interests in the Middle East".

"It’s the energy war between many nations in the Middle East, and especially when it comes to natural gas pipelines", Azadgan pointed out.

According to some estimates, Iranian proven oil reserves rank the fourth largest in the world with 155,600 million barrels.

Fourth, "Iran is just a small part of… the big game that is the changing of the petro-dollar system", the geopolitical analyst presumed, referring to a "club" of countries, including Russia and China, who are now drifting away from the dollar and embracing local currencies amid the US sanctions and tariff spree.

By Starting War With Iran Trump Will Open Pandora's Box

Still, according to Azadgan, it is unlikely that Donald Trump will resort to a military option against Iran.

"Are we looking at an unstable rattling situation between these two countries, Iran and the US? Yes. We’ve heard unconstructive comments from both sides. Will that actually translates into a long-term conflict? I don’t think so", the geopolitical analyst said.

British academic Dr Alam Saleh shares a similar stance: "The military presence in the region, however, has not meant military confrontation", he opined. "Trump knows well that launching a war against Iran would not end anytime soon, and it will not stay limited to the Persian Gulf region".

"Iran will prolong the war, it will extend it to other parts of the already fragile Middle East, and of course it will diversify the war by employing and or adopting any means and methods to frustrate United States’ and its allies’ interests. The war will affect the global economy. Trump also lacks international support for his claims", the British lecturer highlighted.

Amid ramping up tensions with Tehran, the Trump administration has repeatedly voiced intent to start a "dialogue" with the Islamic Republic. However, the Iranian leadership rejects the idea of the talks, expressing distrust and referring to the 2015 JCPOA deal that was unilaterally torn up by Donald Trump.