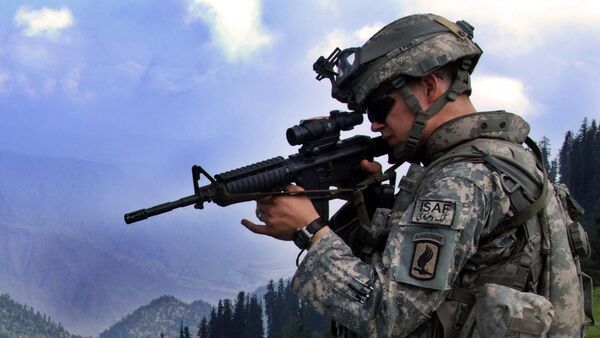 CC BY 2.0 / The US Army /
Subscribe
KABUL (Sputnik) - The United States is "doing fine" in Afghanistan and will soon see its troops in the Islamic republic halved to 8,000 soldiers, President Donald Trump said in an interview with the Time magazine amid nearing US-Taliban talks.

He reiterated that he was always against spending billions of dollars and losing an "unbelievable numbers of lives" on both sides.

"It was a terrible decision to go in. It’s quicksand. Always has been, always will be. And we’re doing just fine. We did ISIS [Islamic State terror organization, banned in Russia]. We’re doing fine in terms of Afghanistan. We’re down to half — we’ll soon be down to about 8,000 soldiers," he added.

In February, Trump said that future reductions in US forces would be tied to progress in peace talks, apparently backing away from a December announcement of plans to cut the present US deployment in Afghanistan.

The troop drawdown comes as the US and the Taliban are engaged in months-long peace talks, with the Afghan government sidelined so far.

The Taliban delegation, meanwhile, has been paying visits to regional countries to gain support for its efforts from neighbours. Chinese Foreign Ministry spokesman Lu Kang earlier confirmed that the Taliban did visit Beijing to discuss the Afghan peace process and counterterrorism issues. Lu did not specify who represented China at the talks. A Taliban source also confirmed that the movement had visited Iran to discuss possible agreements with the United States.

The Taliban and the United States are expected to hold another round of peace talks soon, yet the exact date is still unknown.

"The talks with US will take place but the exact date is still not clear, the agenda is same as it was in previous talks," Taliban spokesman Zabihullah Mujahid said.

The Taliban and US have said they are discussing two main issues: troop withdrawal and a guarantee that Afghan soil will not be used by international terrorists. Washington has however stressed that it has been seeking for a comprehensive deal, focusing on four main issues — ceasefire, troop withdrawal, intra-Afghan talks and a guarantee of Taliban will not cooperate with international terrorists. The Taliban, in turn, have said that they are not discussing intra-Afghan talks and ceasefire with the US.