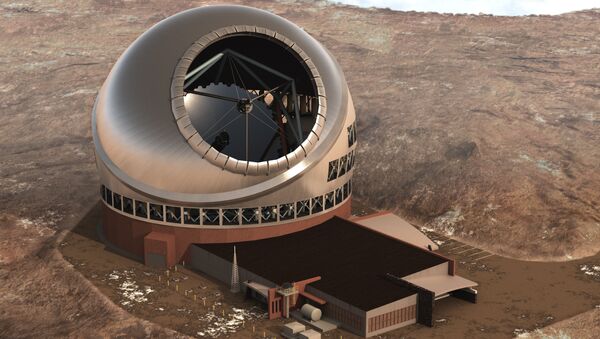 Despite years of consistent pushback from Native Hawaiians, Governor David Ige announced Thursday that construction of the Thirty Meter Telescope (TMT) will proceed on Mauna Kea, a dormant Hawaiian volcano deemed sacred by some cultures.

On June 20, Hawaii’s government announced via livestream that the state had granted a “notice to proceed” to the TMT project following the removal of “four unauthorized structures.” In addition, Ige announced the Hawaiian Supreme Court had ruled two ahu be removed from the TMT site, as they “did not constitute a traditional or customary right or practice.”

An ahu is defined as a collection of stones generally used to represent an altar, shrine or memorial, according to Wehewehe Wikiwiki.

Since October 2014, the construction of the telescope has been opposed by droves of protesters asserting that Mauna Kea’s peak, the highest point in all of Hawaii, is sacred, religious ground that should not be used for the telescope project.

Protests have halted every attempt to resume the TMT project since the first successful demonstration.

“What’s the argument for taking them down? It’s completely discriminatory. It’s hostile to the Native Hawaiian people,” Native Hawiian activist Kealoha Pisciotta told the Associated Press Thursday. “These are places of worship and the places where we lay our offering and our prayer.”

Aware of the backlash to come, Ige claimed Thursday that the Hawaiian government would be working closely with the project to ensure the proper respect is paid to the Native Hawaiian culture.

“We will proceed in a way that respects the people, place and culture that make Hawaii unique,” Ige claimed during the press conference. “I will continue to work with the University of Hawaii and all our partners to make meaningful changes that further contribute to the co-existence of culture and science on Mauna Kea.”

We will proceed in a way that respects the people, place & culture that make Hawaiʻi unique. I will continue to work with UH and all our partners to make meaningful changes that further contribute to the co-existence of culture and science on #MaunaKea. https://t.co/VyVdOIgCYG

However, Ige’s assurances did not seem to convince those against the telescope. Social media users on both Facebook and Twitter voiced overwhelming opposition to the project, with netizens such as Kekoa Kaaiawaawa sternly asserting under the livestream, “If you not Hawaiian your comments are meaningless. Period!”

That’s respect? Is that what your mother taught you? Heil Ige! Hawaiʻi’s ambassador of fake aloha. Criminalizing Hawaiians for being Hawaiian on Hawaiian land. We must end the ethnic cleansing of Hawaiians @TMTHawaii @uhmanoa

Sorry, Ige, protests will not be made comfortable. That's not how protesting works. Just like how bulldozing sacred ground so that we can search for our alleged origin point in deep space, in complete disregard for any Hawaiian origin story, is not how respect works.

Sell out! You’re not for the people at all.

For supporting the continued cultural masacre agenda of colonization?

The press release notes the telescope project, which will purportedly “allow us to see deeper into space and observe cosmic objects with unprecedented sensitivity,” will receive a start date after relevant Hawaiian agencies meet with project leaders.