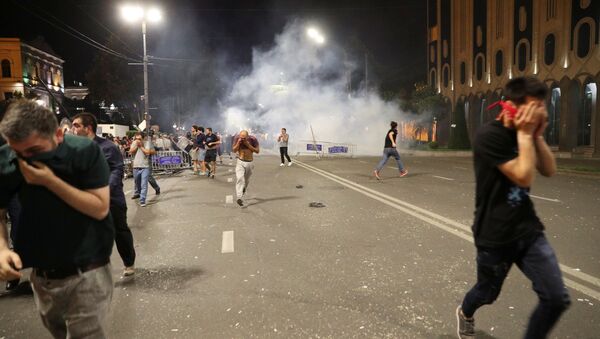 © AP Photo / IRAKLI GEDENIDZE
Subscribe
Thousands of protesters clashed with police Thursday evening after an opposition faction attempted to take over Georgia’s Old Parliament building where a General Assembly of the Interparliamentary Assembly on Orthodoxy had taken place earlier in the day.

Thursday evening, protesters began gathering en masse near the Old Parliament building on Rustaveli Avenue in Tbilisi. The opposition called for the resignation of Georgian Interior Minister Giorgi Gakharia and the head of the Parliament, Irakli Kobakhidze. The radical activists attempted to storm the Parliament building, prompting police to introduce crowd control measures.

Growing protests in #Tbilisi now. Certainly not the first time we have seen this recently, but I think this time may be different. Hope so anyway. pic.twitter.com/mwpjhRtnj1

​Earlier in the day, opposition lawmakers left the Assembly meeting after Russian representative Sergey Gavrilov opened the session while sitting in the seat of head of Georgian Parliament. After their demarche, a group of radicals stormed into the building, splashed Gavrilov with water and attempted to rip documents out of his hands.

During the protests, police used rubber bullets, tear gas and water cannons in order to disperse the crowd. Nearly 70 people, both activists and law enforcement personnel, sought medical attention after the clashes.

​Gakharia said he would be willing to resign if it became necessary.

​"Thirty activists and 38 law enforcement officers have requested medical assistance. They are not in serious condition," said former Georgian Health Minister Davit Sergeenko, who visited the hospitals where the injured had been brought. At least one Georgian reporter was injured by a rubber bullet.

Protesters mostly dispersed by 2:40 local time (GMT +4), and police began detaining those who remained in the square.

The Georgian Interior Ministry called the protests a government overthrow attempt, saying the demonstrators attempted to get inside the Parliament building despite a police warning.

Prime Minister Bakhtadze blamed the opposition for trying to destabilize the country.

Russian Deputy Foreign Minister Grigori Karasin condemned the radical political forces of Georgia for interrupting the Assembly’s work. The Russian head of Parliament, Vyacheslav Volodin, blamed Georgia for its inability to secure the event and protect the Russian delegation from assault and threats.

In 2008, then-president Mikheil Saakashvili, in violation of a pre-existing agreement, launched a military operation against South Ossetia, which Georgia considers to be part of its territory, attacking Russian peacekeepers charged with maintaining security in the republic. Russia was forced to intervene in order to protect Russian nationals living there. Following an armed conflict that lasted five days, Georgia cut diplomatic ties with Russia.

​Since that time, bilateral relations have remained tense, with some officials occasionally making statements about Tbilisi’s unwillingness to engage in cooperation with Moscow. Objective trade factors, such as Georgia remaining one of the major destinations for Russian tourists and Russia remaining one of the primary markets for Georgian goods, have nonetheless stimulated Georgian officials to engage in negotiations.

In 2012, during Saakashvili’s term, Georgia introduced a visa-free regime for short-term visits by Russian nationals. Despite the belligerent rhetoric of new president Salome Zourabichvili toward Moscow, Georgia and Russia successfully engaged in trade and customs agreement negotiations in Geneva. The next round of negotiations is scheduled for September 2019, according to a Russian Foreign Ministry statement made earlier in May.

000000
Popular comments
The AmeriKKKan fascist regime is on steroids and in death throws simultaneously.