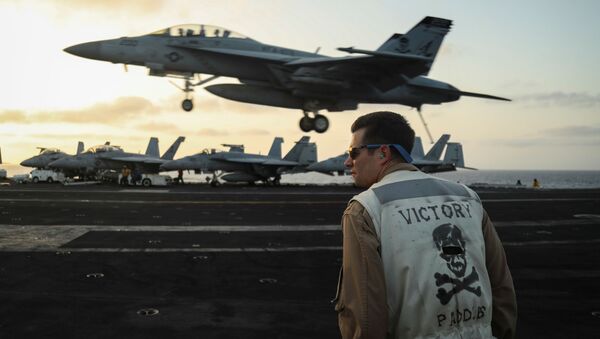 © REUTERS / Jeff Sherman/U.S. Navy
Subscribe
It was reported on Thursday that Donald Trump had approved a military operation against Iran after it downed a US reconnaissance drone, but later backpedalled on the decision.

Keyvan Khosravi, a spokesman for Itan's Supreme National Security Council, dismissed reports that the United States had tried to reach out to Iran via Oman in the wake of yet another spike in tensions in the Gulf.

“The United States did not send any message through Oman,” Khosravi told state broadcaster IRIB on Friday.

This statement came in response to a report by Reuters, which alleged, citing unnamed Iranian officials, that Tehran received a message from President Donald Trump overnight about an imminent attack but refused to hold talks with the US president.

According to the report, Iranian authorities received the message via Oman, a close US ally.

Trump reportedly told Tehran that he was "against any war with Iran and wanted to talk to Tehran" but still gave Tehran a deadline to respond and sit down at the negotiating table.

Iran was said to have replied to Oman that Supreme Leader Ayatollah Ali Khamenei opposes any talks with Washington but would still be given the message.

"However, we told the Omani official that any attack against Iran will have regional and international consequences," the Iranian officials told Reuters.

Iran-US tensions escalated further following the downing of a US spy drone by the Iranian military on Wednesday night.

Tehran claimed in a letter to the UN that the drone was on a spying mission in its airspace in the southern Hormozgan Province, while the Pentagon insists it was in international airspace above the Strait of Hormuz.

Iranian Foreign Minister Zarif said that the remains of the drone were retrieved from Iran's waters.

Iran's deputy foreign minister told the Swiss ambassador, who represents US interests in the country, that "there is irrefutable evidence about the presence of this drone in Iran's airspace" and that "Iran would not hesitate for a moment to decisively defend its territory against any aggression", Fars News reports.

Donald Trump echoed his military's version of events and said Iran had made a "very big mistake" but later downplayed the escalation.

Meanwhile, reports surfaced in US media that Trump had given the go-ahead to a missile strike on a series of Iranian targets, such as radars and missile batteries, but later dropped the plans.

It comes on the heels of attacks on six tankers near in the Gulf of Oman in two separate incidents over the course of the past month. Although UAE investigators have so far failed to assign culpability, the United States blamed all attacks on Iran, which denied any involvement.

Against the backdrop of these incidents, the United States has been beefing up its military presence in the region − in terms of both troops and weaponry − citing a yet-unspecified threat from Iran and local proxy groups it is allegedly backing.

Washington has enforced a "maximum pressure campaign" on Iran, as Secretary of State Mike Pompeo put it, over its alleged nuclear weapons proliferation efforts and support for "terror groups" in the Middle East.

The US pulled out of the hard-fought 2015 nuclear deal in May 2018, saying that it failed to curb Iran's nuclear ambitions, and started imposing crippling energy and banking sanctions on the oil-rich Islamic Republic. Iran has opposed being coerced into a new deal and also suspended parts of its commitments under the 2015 accord.