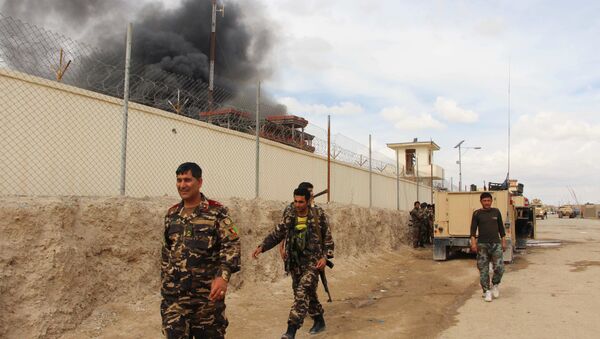 © AP Photo
Subscribe
MOSCOW (Sputnik) - Two Taliban fighters were killed during a raid in Bala Boluk district of Farah province, sources said, as cited by the Khaama Press News Agency. About 1,000 pounds of Hashish and a cache of weapons were destroyed during the operation.

A separate operation in Nimroz province reportedly resulted in the deaths of four Taliban fighters and the detention of four others.

Taliban fighters have a relatively huge presence in the southwest of the country where they often attack police, special forces and civilians.

Meanwhile, Afghan security forces also killed 13 terrorists including two foreigners on Friday in Faryab province to the north of the country, according to the Khaama Press news agency, citing the Afghan military. The terrorists were eliminated in an airstrike carried out in Pashtun Kot district of Faryab province. One of the foreign militants killed reportedly was Ali Aka from Uzbekistan.

Conflict-struck Afghanistan has long been suffering from an unstable security situation. The government has been fighting the Taliban movement, which has been waging a war against Kabul for almost two decades, and the Daesh terrorist group, which has been operating in Afghanistan since 2015, as well as groups affiliated with al-Qaeda and other insurgents.

In the meantime, Pakistan is scheduled to host a meeting on the Afghan peace process on Saturday, with senior Afghan officials expected to take part.

It is not clear yet if Taliban members would attend the Saturday meeting.

The United States has also started peace talks with the Taliban but months-long negotiations have not resulted in a breakthrough yet. The talks are mainly focused on foreign troop withdrawal and a guarantee that the Afghan soil will not be used as a terrorist harbor in future.

*Daesh, Taliban, al-Qaeda (ISIS, ISIL, IS or Islamic State) are terrorist groups banned in Russia and many other countries.