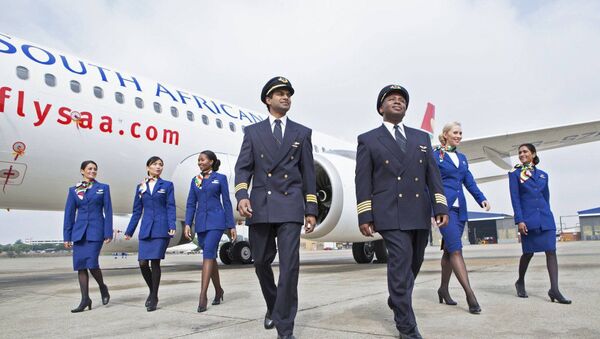 © Photo : FlySAA /Facebook
Subscribe
A statement jointly issued by the union blasted the Rothschilds for allegedly meddling in the South African companies' affairs for “selfish and greedy purposes”.

According to the newspaper, the unions allege that the Rothschilds are “interfering” in the affairs of local state-owned companies for “selfish and greedy purposes”, and they're seeking to make the South African Airlines to collapse to pave the way for the company's privatisation.

The unions now call for the removal of several SAA board members, like Mark Kingston, whom they suspect of having ties with the Rothschild family, along with one board member who actually carries the Rothschild name – Geoff Rothschild, former JSE chairperson

The statement issued by the unions also criticised Finance Minister Tito Mboweni who allegedly displayed “reckless” disregard for the future of the airline.

NUMSA and SACCA are united in their demands. We want Vuyani Jarana to be reinstated.#SAAPicket#SAVESAA#SAVEOurSOEs@SAFTU_media@IOL@News24 pic.twitter.com/1tFoDgUe6F

Mclupo
20 June 2019, 22:39 GMT2
000000
bravo for still having unions and not letting the money worshippers have their way. True patriots. Palestinians as well