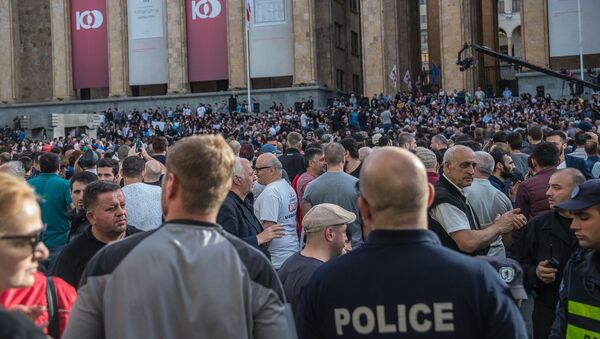 © Sputnik
/
Go to the photo bank
Subscribe
Despite police efforts to hold back thousands of protesters, some demonstrators managed to break into the parliament's courtyard, according to the local media.

Demonstrators, as well as opposition representatives, are attempting to storm the parliament building in Tbilisi, demanding the ouster of Parliamentary Chairman Irakli Kobakhidze and Minister of Internal Affairs of Georgia Giorgi Gakharia, Georgia's Channel 1 reported on Thursday.

Police are now blocking off access to the building to the demonstrators, and clashes with the law enforcers have been reported along Prospect Rustaveli, one of Tbilisi's central thoroughfares. Some demonstrators managed to break into the parliament building's courtyard, according to Georgia's Channel 1.

Bottles and other items were reportedly thrown at a special police unit operating at the site.

This comes after Georgian opposition lawmakers left the 26th Interparliamentary Assembly on Orthodoxy (IAO) session earlier on Thursday as President of the Assembly Sergey Gavrilov, a member of the Russian delegation, opened the session in the seat of the head of the Georgian parliament. The session was interrupted, then the building was assaulted by radicals. Gavrilov later told Sputnik that water was splashed over him. In the aftermath of the incident, protesters are now demanding the resignation of the parliamentary speaker and the interior minister.

The members of the Russian delegation have already left the Georgian capital.

000000
Popular comments
Article leaves out the reason why a little more history of the reason for protests would be nice
Tazo
20 June 2019, 22:22 GMT
000000
Storming Parliament is very USA, democratic.