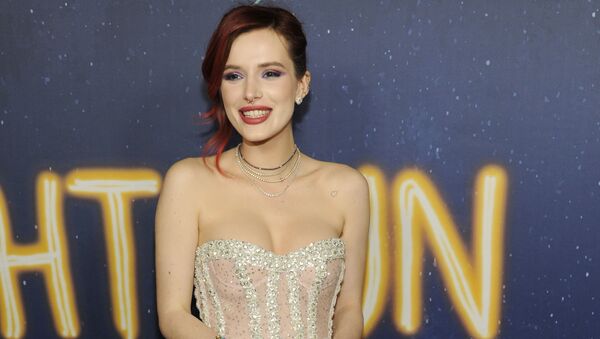 © AP Photo / Chris Pizzello
Subscribe
On 15 June, US actress and singer Bella Thorne opted to “take the power back” by releasing her own nude photographs on social media after hackers threatened to leak the images online.

Bella Thorne has called out Whoopi Goldberg for her “sick” reaction to the actress releasing her own nude photographs online.
On Monday’s episode of the ABC daytime talk show The View, Goldberg deplored Thorne’s decision to make the topless images public on social media, and seemingly blamed her for taking nude photographs in the first place.

“If you’re famous, I don’t care how old you are. You don’t take nude photos of yourself", Goldberg said. “If you don’t know this in 2019, that this is an issue, I’m sorry...You cannot be surprised if someone’s hacked you, especially if you have stuff on your phone".

Thorne took to Instagram on Tuesday to vent her emotional response to the 63-year-old celebrity’s criticism, releasing a spate of scathing Stories.
“Shame on you Whoopi", Thorne said in one video.

“I just want to say that me watching this video made me feel really bad about myself...You’re so crazy for thinking such terrible things on such an awful situation".

“Saying if you take a sexy photo then basically it deserves to be leaked like…So if I go out to a party drinking and I want to go dancing on the dance floor…do I deserve to be raped too?”

In an open letter posted to her Instagram Story, Thorne slammed Goldberg for choosing to shame girls for taking nude photos of themselves, and added it was “sick and disgusting” to blame them.

She called on Goldberg to reconsider her stance, as young girls watch her show, and this could emotionally scar them.
Thorne stated she would also boycott The View, cancelling a planned appearance on the show since she didn’t “want to be beaten down by a bunch of older women” over her body and sexuality.

On Saturday, the 21-year-old American actress, model, singer and music video director chose to “take the power back” by publishing her own topless photographs on social media, thus forestalling hackers' threats to release the images. “U [sic] don’t get to take another thing from me. U [sic] can’t control my life, you never will", Thorne wrote in an open letter on Twitter.

​Bella Thorne is the latest celebrity to have her privacy violated as a result of a hacking attack. A few years ago, several famous women -- including Jennifer Lawrence, Aubrey Plaza and Kate Upton -- had their private photos hacked and shared online.

000000
Popular comments
Perhaps let me hear you say Whoop wey yay yay, will conduct an interview with this female in it's birthday suit, to express repatriation of joy.