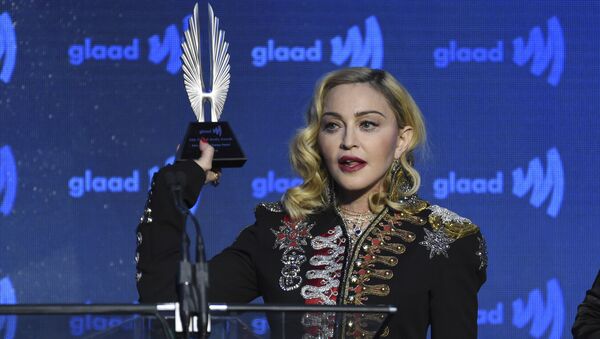 Marcelo Burlon, the creative director of Italian brand County of Milan, hit out at the 60-year-old singer for wearing his clothing.

Madonna was pictured at an airport in a pair of black sweatpants and a matching sweatshirt emblazoned with colourful figures and drawings.

Burlon was not happy.

“And the time finally came that Madonna, la cessa, wore County [of Milan]. I want to guarantee that nobody has given her anything for free, but that she paid with your money,” he wrote in a now-unavailable Facebook post, according to diet_prada, the self-styled fashion industry's watchdog.

Diet_prada noted that “la cessa” is an Italian slur that translates to “human toilet” or “ugly as f**k”.

@marceloburlon proving to be human garbage. Yesterday in Facebook post, the designer captioned a photo set of @madonna wearing the brand. An approximate translation reads: “And the time finally came that Madonna, la cessa, wore County [of Milan]. I want to guarantee that nobody has given her anything for free, but that she paid with your money.” “La cessa”, is an Italian slang word that basically means human toilet or to say that someone is ugly as f**k. After deleting the Facebook post, Burlon began publicizing those same photos on Instagram stories 🙄🤮. Dieters, time to file him and his brand along with the other woman-shaming misogynist designers (Stefano and Philipp Plein, we’re looking at you). Swipe ▶️ for his lame ass apology plus some cringey hypocrisy. • #marceloburloncountyofmilan #marceloburlon #countyofmilan #mfw #milanfashionweek #menswear #mensfashion #streetstyle #hypebeast #streetwear #misogyny #misogynist #hypocrite #lame #garbage #jerk #loser #madonna #madge #hoodie #sweatpants #logo #graffiti #wiwt #ootd #airportstyle #dietprada

Following a wave of shaming comments accusing Burlon of misogyny, he issued a lengthy public apology.

“Social media is a tool which can often be used for a frivolous laugh, but what I really learned today is that this should never ever be at the expense of another person, or group of people,” he said.

“I would like to ask forgiveness and express my most sincere regret to Madonna and anyone whom I might have offended, insulted, or touched,” he said, referring to his comments as a “naïve and stupid mistake” that was not intended to incite hatred.

“Yesterday I posted images of Madonna wearing my brand stating that she purchased the garments herself. I haphazardly and irresponsibly used a common Italian slur to describe her. The term, which I use often with close friends, in context is non offensive, but I clearly understand that it was my mistake to assume that I could speak on social media using the same tone that I use in my daily private life.”

A number of angry commenters, however, refused him redemption.

“This apology is so transparent and insincere,” said a user with the handle isabelle_staub.

Another added: Apologize all you want. We know your true colours.”

“Clearly didn’t write this himself. It’s got PR written all over it,” a commenter sneered.

Madonna has not reacted to the row so far.