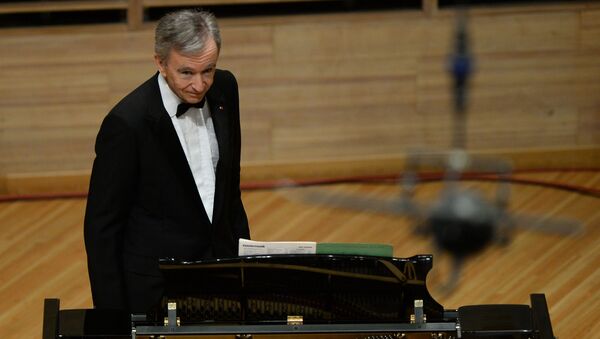 © Sputnik / Евгений Одиноков
/
Go to the photo bank
Subscribe
Bernard Arnault, CEO of French luxury brand giant LVMH, made headlines earlier this year when he pledged $327 million to help restore the Notre Dame de Paris after a devastating fire. Last week, a senior cathedral official said they have yet to receive "a cent" from Arnault or the other wealthy individuals who pledged to donate.

According to the business resource, Arnault's net worth grew by almost $32 billion this year alone amid record sales and profits, with his total value of $100.4 billion estimated to be worth in excess of three percent of France's GDP, and greater than the total GDP of some 108 countries. Bezos was said to have retained the top spot, with $119 billion, with Gates trailing with $106 billion. Investor Warren Buffett and Facebook founder Mark Zuckerberg joined the top five, with their total wealth estimated at $84.7 billion and $73.7 billion, respectively.

Arnault entered the 'centibillionaires' club on Tuesday, after LVMH's shares hit a record 368.80 euros a share.

The mogul personally controls about 40 percent of LVMH's shares and 60 percent of its voting rights, and owns a 97 percent stake in Christian Dior, LVMH's parent company. The 70 year-old businessman began building his luxury goods empire in the mid-1980s after acquiring the bankrupt textile group which owned Christian Dior, creating LVMH in 1987 through the merger of Louis Vuitton and Moet Hennessy. Between 2010 and 2013, he served on the board of advisors for Malaysia's 1MDB fund, a controversial strategic state-run development firm suspected of money laundering and fraud.

The news of Arnault's newfound status was met with interest on Twitter, quickly degenerating into a debate about wealth, inequality, and humanity's priorities.

A vibrant symbol of what's possible in capitalism.

Why the envy? That's a horrible emotion that will always keep you poor.

Bravo!!! 6000 million people in poverty and a dying earth we should be proud. Nothing against wealth, I love luxury as well but please, could they even enjoy all that money? I believe there should be limits in some human behaviors