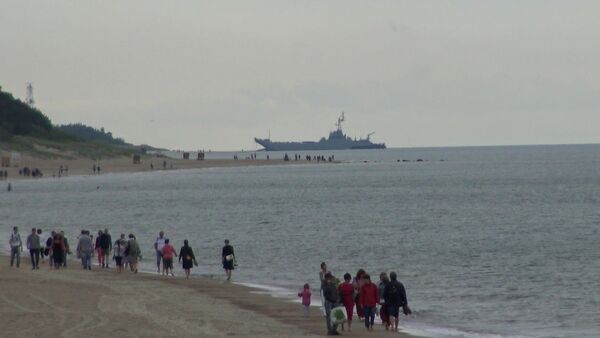 © Photo : YouTube/Darius M
Subscribe
Over a dozen NATO countries plus 'partner nations' Finland and Sweden are in the midst of the BALTOPS drills, with dozens of surface ships, submarines, aircraft and about 8,600 troops taking part in the maneuvers. The Russian military has said that it is closely monitoring the exercises.

The ORP Gniezno, a Lublin-class landing ship, suffered damage to its hull during a recent drill, RMF24 has reported.

According to the news portal, the incident took place off the coast of Lithuania, with the ship reportedly striking a local rock formation during an amphibious landing operation, resulting in damage to the trim in the central part of its hull and causing seawater to flood into the ship.

A representative from the 8th Coastal Defence Flotilla, to which the ORP Gniezno is attached, was quoted by RMF24 as saying that the situation was under control, the ship remained in working order and is continuing its mission.

Commander Grzegorz Lewandowski, a spokesman for the 8th Flotilla, later confirmed to the Polish Press Agency that the ship had "hit an underwater object" during a beach landing resulting in damage to its underbelly. Lewandowski said the ship was returning to Poland on Monday, as scheduled.

The ORP Gniezno was built at the Gdansk Shipyards in 1988, and is designed to transport up to 9 T-72 tanks or 17 armoured vehicles, and 135 fully-equipped marines. Built while Poland was still a member of the Soviet-led Warsaw Pact, the ship can be fitted with a number of Polish and Soviet-era air and maritime defence systems, and is also capable of transporting and laying mines. The Polish Navy has five of the Lublin-class ships.

Last week, 16 NATO nations plus Finland and Sweden kicked off the BALTOPS-2019 military drills, with about 50 surface ships and submarines and 40 aircraft, as well as 8,600 troops simulating air defence, amphibious landing operations, sea mine clearance and anti-submarine warfare. The drills are expected to wrap up on Friday.