MOSCOW (Sputnik) - Russia is ready for US possible attempts to destabilise the situation but will abstain from deploying its missiles anywhere until the United States makes a similar step, Russian Deputy Foreign Minister Sergei Ryabkov said on Tuesday.

"Russian President [Vladimir Putin] said on 2 February that, being guided by our responsible approach to ensuring global peace and security, we were launching scientific, research and development activities for creating medium-range missiles so that we were able to repel prospective US missiles, the production of which has entered an advanced stage," Ryabkov said in his address at the lower house of the Russian parliament.

He went on to note that, at the same time, Russia "will abstain from deploying our units [missiles] anywhere until the United States does it."

Ryabkov's remarks come after Vladimir Dzhabarov, the deputy chairman of the Russian upper house's foreign affairs committee said the day before that Moscow will boost its military force at the country's western border as a retaliatory measure to US move to send more troops to Poland. The official also stressed that Russia would retaliate if it faced an attack from the Polish territory.

Last week, US President Donald Trump and Polish President Andrzej Duda agreed that the United States would establish a reconnaissance squadron of MQ-9 Reaper unmanned aerial vehicles in Poland and place an additional 1,000 US troops; the move is expected to be funded by Warsaw. 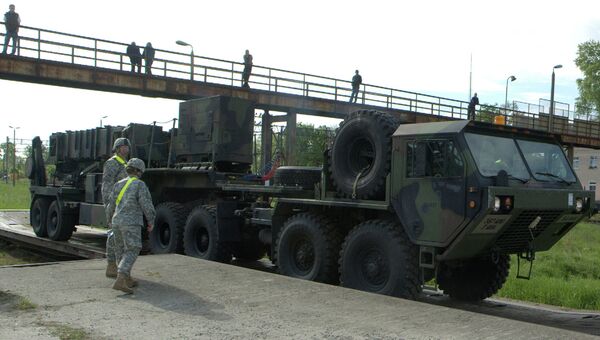 Recently, some speculations about the US plans to set up a military base in Poland emerged as Polish authorities have cited the alleged Russian threat as one of the reasons for its military build-up. Moscow, for its part, has repeatedly emphasised that it will never attack any of the NATO members. According to Russian Foreign Minister Sergei Lavrov, NATO is well aware Moscow has no plans to attack anyone and uses the alleged threat as a pretext to deploy more troops near Russia's border.

On Tuesday, the lower house of the Russian parliament (the State Duma) passed at its plenary session a bill suspending the Russian-US Intermediate-Range Nuclear Forces Treaty (INF).

The upper house of the Russian parliament is going to discuss the bill on 26 June and lawmakers are likely to support it, senior Russian lawmaker Sergei Tsekov said.

"If the documents from the State Duma are ready, and I think they certainly will be, then we will discuss this at a session on June 26," Tsekov said, stressing that the upper house lawmakers would vote in favour of the bill.

"Everybody has long been aware of the situation, and everyone understands it. The decision is being taken as a response to US de facto withdrawal from the INF," Tsekov added.

This comes after Russian President Vladimir Putin submitted the bill to the lower house in late May.

The United States formally suspended its obligations under the INF Treaty on 2 February, over alleged violations by Russia, and triggered a six-month withdrawal process. Russia denied the accusations, saying that it was Washington that breached the deal, signed in 1987. Russian President Vladimir Putin signed on 4 March decree on Russia's suspension of participation in the INF Treaty.